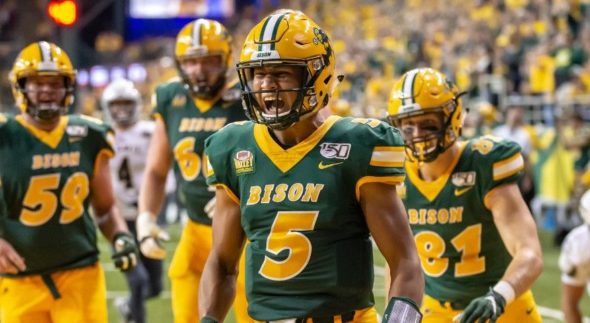 All Aboard the Trey Lance Train!!!

Guess who is the newest member to jump on the Trey Lance Train?  If you said Mel Kiper Jr. you are right!

Trey Lance is a special player and while everyone is talking about Trevor Lawrence and Justin Fields, the FCS gunslinger is finally getting some National love.

Kiper said that Lance could very well follow in North Dakota State’s recent track record of quarterbacks being drafted of Carson Wentz and Easton Stick, with Lance being mentioned closer to the caliber of Wentz than Stick.

Only 9 quarterbacks from the FCS have been drafted in the past decade. Carson Wentz was the second overall pick.  Think about that for a minute.  This statement makes it feel like Kiper Jr. thinks Lance could be a first round pick.

Well he would not be the only one that feels that way!!! (I do too)

“This kid is a dual threat like Justin Fields,” Kiper said, referring to the Ohio State quarterback. “A Justin Fields at a lower level of competition so why shouldn’t he be way up there?”

Kiper talked about the Senior Bowl and said that if Lance was to declare after this season he would not be eligible for the game in Mobile.  He also stated that there has not been any talk of him leaving college early. Kiper Jr. was gushing about Trey Lance though.

“But he was week after week, flawless,” Kiper said. “He didn’t make mistakes. I mean, zero picks. When have we ever seen that?”

Lance was only a red-shirt freshman last year.  North Dakota State fans are already on the Trey Lance Train as we call it, but it sounds like with another solid year of football from the young Lance, we could see another QB taken early from the FCS.

Lance led the Bison to an undefeated season, and completed 67 percent of his passes.  If he can put up impressive stats and continue to show his accuracy he could be one of the top 3 quarterbacks drafted in 2021.