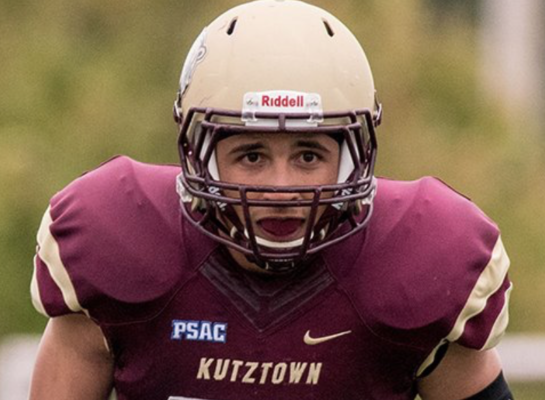 Shawn Turber-Ortiz seems to always be around the ball, and if you try to run across the middle he will be there waiting.

Shawn Turber-Ortiz plays a huge role in the secondary for the Division II powerhouse Kutztown University. The high flying safety enters his senior season with 248 career tackles and 13 interceptions. Ortiz had 73 tackles through the team’s first seven games in 2019 before an injury limited his playing time for the remainder of the season.

Just how good was Ortiz last season? The playmaking safety was named PSAC East Defensive Athlete of the week three times. Despite the injury, Ortiz still claimed a spot on the All-PSAC East First Team for the second straight year. He was also named to the Don Hansen Gazette All-Region Team for the first time in his career.

Turber-Ortiz looks to capitalize on his senior season

Now entering his senior season, Ortiz looks to continue his reign of dominance in the PSAC Eastern Division. Ortiz has dominated on the defensive side of the ball since arriving at Kutztown. In his redshirt freshman year, he made 11 starts at safety, finishing the year with 62 total tackles and six interceptions. During his sophomore season, Ortiz once again played in all 11 games, finishing with 107 tackles and three interceptions.

Last year, he did have a tackle in every game, despite an injury that held him back. That’s pretty impressive and just shows how big of a competitor he is on the field. His aggressive playing style translates to the next level as Ortiz could see himself in the rover linebacker position in the pros. Ortiz is the type of guy you love to have on your team and hate to go against.

Watching Kutztown games last year, Ortiz was all over the field making plays. I could personally see him being used by teams as a rover linebacker in the pros, and would not be surprised if he finds his way on an NFL roster come 2021.

Turber-Ortiz is a machine on the field. The senior safety is all over the field, and has a high-motor. I would not be surprised to see players like Turber-Ortiz start to get a better shot at the next level. He takes good angles and seems to always be in the play.  When he comes down hill watch out, he will knock you out.  He hits hard and has hands.  He has been a ball-hawk for Kutztown. – Damond Talbot, Owner, NFL Draft Diamonds