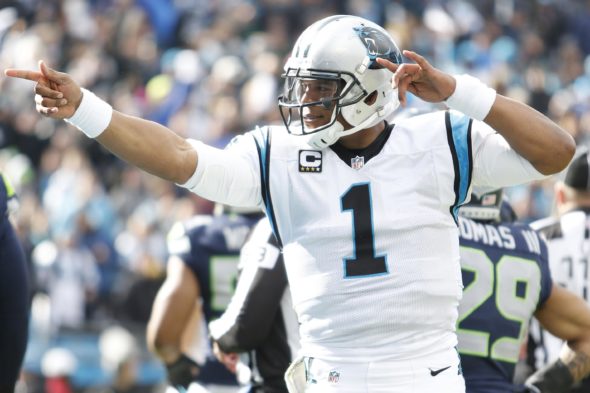 Cam Newton is too athletic to be sitting at home, and he is younger than Seahawks starting quarterback Russell Wilson.

The Seattle Seahawks have Russell Wilson and Anthony Gordon (who was undrafted) as the only two quarterbacks on their roster at this point.  I think the Seahawks should dive into the Cam Newton scene and sign him on a one year deal.

Think about it, Newton has a chip on his shoulder right now. He is pissed, can you believe it the team that drafted him basically took another quarterback over him in Teddy Bridgewater and let him walk.

Now he is easily the best quarterback available and when I look at other teams around the league I cannot think of a better fit than the Seattle Seahawks.

The team with the greatest need at quarterback, New England, hasn’t made any noise on the Newton front. The Redskins who have coach Ron Rivera does not seem very interested.

“You know, the thing about Cam really is the situation,” Washington Redskins coach Ron Rivera explained during a Thursday appearance on Good Morning Football. “We’re in a situation where we’ve got two really young quarterbacks, one that’s been with us, been in the system, understands how we want things done and the other one is a guy who was taken last year in the first round and shows some promise. “I think with Cam, and I have thought about it, I mean, it’s something that’s run through my mind, and it’s about the situation and circumstances. I’m not sure I would do it. I’m not sure if I wouldn’t do it. It depends on circumstances.”

Do what the Saints are doing!

I mean the Saints just signed Jameis Winston to a 1.1 million dollar deal to be their back-up.  Jameis was the NFL’s passing leader last year, but remember this too, Brees is not getting any younger.

Russell Wilson on the other hand is getting older, and been pretty healthy, but if something does happen to him, that leaves the 12th Man with Anthony Gordon.  Could he be another Gardner Minshew?  Maybe, but do you want to find out when the playoffs are on the line?  Or would you rather have a veteran like Cam prepared to come in and take over? Someone that led his team to the Super Bowl already.

Though a foot injury prevented him from playing in all but two games in his final season with the Panthers in 2019, Newton is actually younger than Wilson and will turn 31 in May.

A lot left in the tank

Cam is only one season removed from posting a career-best 67 percent completion rate. He also threw 24 touchdown passes for the Panthers that year. Add 488 rushing yards and four touchdowns!

The Seahawks offensive coordinator is Brian Schottenheimer, a pretty bright mind.  The Seahawks could take a page out of the Saints playbook and sign Cam Newton for one year, then let him leave to become a starter in 2021 landing them a draft pick, OR they could find a way to implement Cam and Russell in the game together.  Both are extremely athletic and I think of Taysom Hill, who can run and catch passes as well as throw.  The Seahawks could have something brewing here, but will they do it? That is the question.