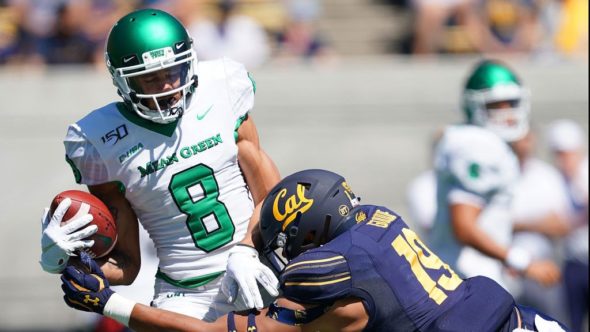 Last season, Rico Bussey was off to a great start before getting hurt.  He tore his ACL in week 3 missing the rest of the season.

Rico Bussey is a Oklahoma native, and he worked extremely hard to land an offer from them, but it never came.  Will they finally wake up and offer him now?

The transfer portal has re-shaped college football for smaller school prospects.  It is allowing kids from the FCS and non power 5 schools to finally get an opportunity to finally play with the Big Boys.

Rico Bussey is a talented wide receiver from North Texas that is searching for a new home, and I love this kids film.

What team is going to land Rico Bussey?

Last season, Bussey tore his ACL week 3 missing the rest of the season.  He could have returned to the Mean Green in 2020, but he decided to enter the transfer portal, and maybe the best player in the entire database.

Several teams that have expressed interest in his so far are Nebraska, Miami and Virginia Tech. I have a problem with this because there should be 30 teams on this list.  Bussey was a Biletnikoff Watch List prospect last year and a Conference USA All-Conference selection in the pre-season.

I look at what Miami has and that makes a ton of sense.  They do have D’Eric King who is a top draft prospect, but I would love to see Bussey go to a team where he is going to get work.  Where will Bussey land? I am telling you, whoever lands the 6020, 195 pound pass catcher is getting a diamond in the rough.