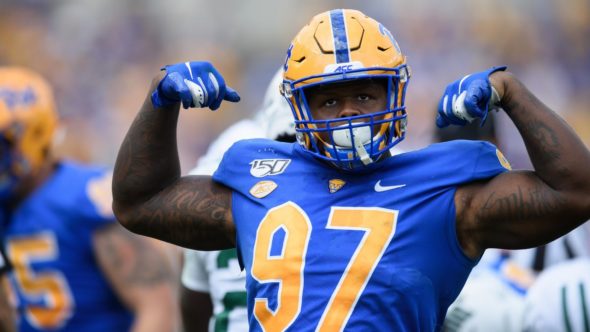 Jalen Twyman is an animal on film.  I am a HUGE fan of his after breaking down film.  Twyman is from the Nation’s Capital, and he has that “It Factor” you are looking for in a defensive tackle.

It is extremely hard to make it out of the Washington D.C. area, but Twyman will not just make it out, he will be able to put the city on his back.  During his senior year at H.D. Woodson the home of several NFL talents like Ken Crawley, Twyman dominated.  He racked up 91 tackles and eight sacks as a senior and led H.D. Woodson to an 11-2 record.

If you are not aware of DC, it is broke into four sections.  Twyman grew up in Lincoln Heights projects in the Northeast.  It is a very crime stricken area, with gun violence, and tons of drugs.  Although, Twyman’s father Guy was incarcerated for seven years, his uncle and older brother were both gunned down and killed.  Twyman needs to get give the Northeast something positive to talk about and I think that is what drives him.

Twyman has a relentless motor.  The kid does not slow down.  He redshirted his Freshman season after being recruited as one of the most heavily recruited players ever from Washington D.C..

In 2018, Twyman played in all 13 games for the Panthers. but only made one start.  He was not very productive but last season, Twyman showed up to the NCAA.

In 2019, Twyman went bananas.  He started all 13 games at defensive tackle and compiled 41 tackles and 10.5 sacks. He was the first interior defensive lineman to lead the team in sacks since guess who?

IF YOU SAID AARON DONALD, you are correct!

Twyman finished as a finalist for the Outland Trophy (Best interior lineman), the Bronko Nagurski Trophy (Nation’s most outstanding defensive player), and the Chuck Bednarik Award for the college football defensive player of the year.  With another big year, we could hear Jaylen’s name called in the first round of the 2021 NFL Draft.

This kid has “it”. What is it? He will not stop until he achieves greatness. You can see it in his film. Twyman always comes through, even when he is tired.  He finished with a team high 12.5 tackles for loss last season.  This is a 6020, 290 pound defensive tackle leading the team in tackles for loss. That is not normal.  You rarely see a talent like him with the work ethic as well. He is determined to be great, and I would not bet against him. – Damond Talbot, NFL Draft Diamonds Owner