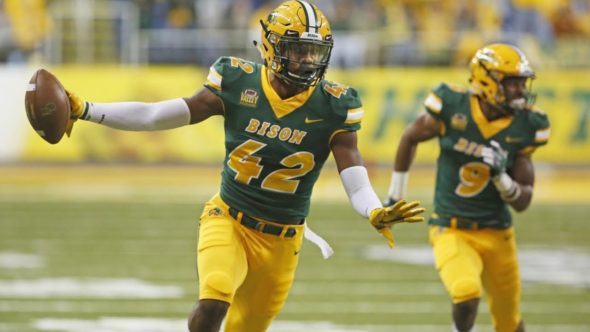 Small School linebacker Jabril Cox will take his talents to the bayou his senior year and play for LSU.

North Dakota State University has been the powerhouse of the FCS division for the past decade.  Much similar to the New England Patriots run in the 2000’s under Tom Brady, the Bison are considered the best team in the FCS almost every year.  Their star linebacker Jabril Cox has already accomplished quite a bit at the FCS level, so he decided for his senior year he would take his talents to the top football division, the FBS.

Being a three time FCS Champion, Cox must have wanted more.  Cox chose LSU over several other major division 1 schools.

How did LSU know about him?

Why did LSU want Cox so bad?  A big reason why LSU recruited Cox so heavily was new defensive coordinator Bo Pelini. Pelini was hired as LSU’s defensive coordinator in January after serving as Youngstown State’s head coach. Pelini had to play against Cox and watch him dominate at the FCS level for years.

To be honest, I think Cox would have been a high draft pick no matter the school he played for next year.  The 6030, 220 pound linebacker is one of the most talented players in college football. Ed Orgeron is happy to have Cox.

“I’m glad to talk about it, he signed so we can finally talk about him,” Orgeron said during the call. “We feel he’s going to be an immediate impact player. We’ve done a good job of graduate transfers here. We are glad we got him.

“We’ve talked to some NFL people, they felt he was going to be a first round draft choice if he went out. Obviously, we lost some linebackers, we got some good young linebackers coming back but this guy should be an immediate impact player for us.”

Cox finished his time in Fargo by earning FCS first-team All-America honors in 2019 after recording 92 total tackles, including 9.5 tackles for loss and 5.5 sacks. He started 15-of-16 as his streak of 31 consecutive starts ended because of a minor injury.

Having played at the highest level in the FCS, Cox will now try to prove his value playing at the FBS.  Cox will be one of the top linebacker prospects taken in the 2021 NFL Draft.

When you look at linebackers, you need to several things.  First, athleticism! Cox has speed, and length which helps him in coverage. Jabril takes great angles, and is not afraid to lower the boom. Another important thing is intelligence, all linebackers have to know their assignments. When watching film of Cox, he rarely makes mistakes.  He is a very smart, remember he is going to college for Psychology with a minor in Business. Lastly, you have to have heart.  This is where Cox will exceed. You will not find a bigger heart on a football player. The Kansas City, Missouri native plays at a very high level, and will give you everything he has every snap. – Damond Talbot, Owner, NFL Draft Diamonds