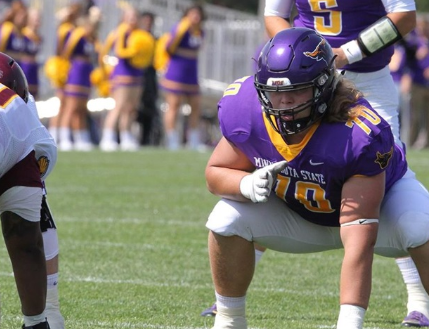 Minnesota State isn’t as big as some of the Division 1 schools maybe but it has everything you need. It’s a place that felt like home to me from the first time I stepped foot on campus. The faculty and students are for the most part very friendly and helpful. The campus can be pretty lively as there is almost always some kind of event going on around. I am majoring in Mass Media with a Minor in Psychology.

My intensity, I’m not as much of a vocal leader but I like to pride myself on being a guy that comes and gives his best day in and day out. Although now I am trying to become more of a vocal leader after we graduated so many great leaders from our team. I want to help the team anyway I can.

As being a part of the offensive line here, we have a standard. We view our role as we are the guys to rely on when the game is on the line. We know games are won up front and we pride ourselves on being able to get the job done. I can play anywhere on the interior of an o-line where we can run the ball when we want and pass when we feel like mixing it up.

Deyon Sizer from CSU-Pueblo. I got the opportunity to play against him twice in my college career.

Shane Zylstra for sure. He was a guy that did all the little things right. No matter what he was doing he gave maximum effort whether it was in football, school or life. He was a guy that was always making sure he was eating what was going to make him perform the best and I admire him for that.

After coming to MNSU in the fall of 2016 during my red-shirt year, I tore the labrum in my hip and I had to have surgery so I wasn’t going to be able to practice. It was hard as I was just starting to learn what college football was about, and I had to sit and watch all my new teammates and friends at practice. We didn’t have a great season that year and we were getting a new offensive line coach so I was worried about having to rehab and get back to the level my teammates were at, but I just focused on one day at a time and just wanted to get better each day.

Wrestling. I was a big wrestler growing up as I was competing both locally and on the national levels for four years. I loved wrestling just about as much as I loved playing football.

Getting the opportunity to compete in the National Championship game last year against West Florida. It is something that everyone talks about as what they want to do but so few actually get to go there and compete for the title.

It isn’t so much as a single play but more so 27 plays. I can proudly say I was a part of an NCAA record breaking 27 play drive against Tarleton State in 2018. We ran the ball 26 out of the 27 and as an offensive lineman nothing makes you happier than running the ball with the game on the line.

My favorite athlete would have to be Quenton Nelson. He is a guy I admire for his play style as he is very physical and dominates the line of scrimmage. That is something I like to try and do on every play.

Luke Combs for sure. I love listening to his music and I’m still a little heart broken after he cancelled his performance at the Country Music festival I was at in 2018. I like to listen to music that gets me feeling energized so it is usually a mix of some rap or some kind of hard rock.

Taco Bell breakfast. I love the Bacon AM Crunchwraps but I try to limit how much I eat them so I like to get that when I feel like treating myself.

I’m a big fan of the Marvel Movies. I have always enjoyed the action and story line throughout all of them with my favorites being the two Guardians of the Galaxy.

I enjoy hunting and fishing. I don’t get to do them as often as I used to but I still enjoy being outside and enjoying nature. When I don’t feel like going outside my favorite hobby would be playing video games with my friends.

My parents. They are both very hard working and are the kind of people that would sacrifice anything to make their children happy. They have both been my biggest supporters in every sport I have done while growing up. I always try to look for them before a game just so I can see them smiling and know I have them on my side cheering me on.