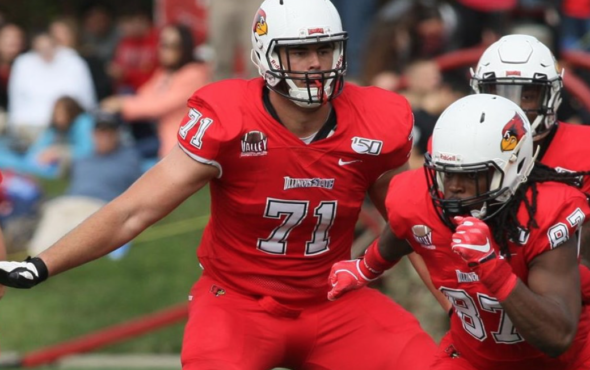 6-foot-10 Left Tackle Drew Himmelman is one of the lineman in all of college football. Picture courtesy of goredbirds.com

Senior Offensive Tackle Drew Himmelman is widely regarded as one of the top linemen in all of the nation. The 6-foot-10, 315 pound left tackle is among the tallest college football players in the nation. Since being handed the started position in 2017, Himmelman has played a huge role for the Illinois State University Red Birds offense that ranks among the best in FCS football.

Last year Himmelman started all 15 games at left tackle and was graded out at over 90 percent for the season. He helped guide running back James Robinson to a league-best 1,899 yards and 18 touchdowns. Just how good was he on the offensive line last year? His dominating season earned him First-Team FCS All-American honors with the Associated Press, STATS FCS, and the American Football Coaches Association.

Himmelman has started in 35 games so far with the Red Birds. He only missed two games in his freshman year and is a beast on the field. He came to campus standing at  6-foot-8 weight 270 pounds and has really transformed himself into an NFL prospect during that time.

If Himmelman can continue his dominance this season I would not be shocked if he hears his name called next year in the draft. NFL teams are always in need of offensive tackles, and Himmelman has proved that he is one of the best in college football.

Himmelman is a monster on the football field. He is huge, and one of the largest offensive lineman in the entire country. In the 2020 NFL Draft, Alex Taylor had size on him standing at 6090, but Drew is 6’10. Both are athletic, but I love Himmelman as a mauler. He has a great drop, and his arms are long.  Defensive ends struggle against him at the FCS level. – Damond Talbot, Owner, NFL Draft Diamonds