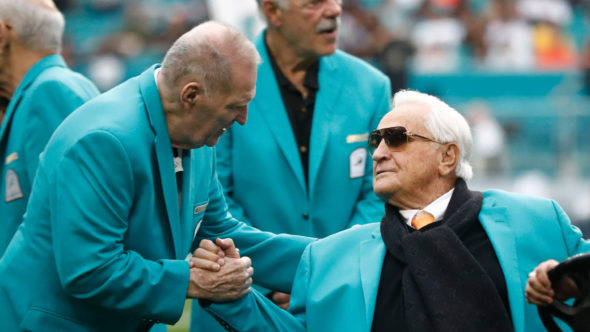 1972 Dolphins are the only team to win every game in a season. Today their coach passed away at 90.

Don Shula, a Hall of Fame NFL coach who led the Miami Dolphins to two Super Bowl titles, has died. He was 90.

The Miami Herald was the first to report the coach’s death, citing one of his children.

The Dolphins statement on the passing of Shula

“Shula was the patriarch of the Miami Dolphins for 50 years. He brought the winning edge to our franchise and put the Dolphins and the city of Miami in the national sports scene. Our deepest thoughts and prayers go out to Mary Anne along with his children, Dave, Donna, Sharon, Anne and Mike.”

Shula held the NFL record for most career wins as a head coach with 347 (328 in the regular season), and will go down as one of the greatest coaches ever. Additionally, Don Shula was inducted into the Hall of Fame in 1997 There is an award named after Don Shula that goes to the best NFL High School Coach.

According to ESPN, by the time he resigned as Dolphins coach after the 1995 season, Shula had been an NFL head coach for 33 seasons (26 with Miami). Only two of his Dolphins teams finished below .500 during those 26 seasons.