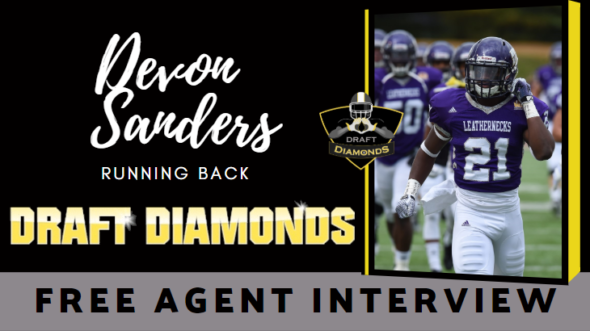 Hello, I am @jrberendzen on Twitter and this is one of my free agent interviews where I ask very deserving free agentsquestions about the players themselves and about what a team would get in these players. All of these players should get picked up by NFL and CFL teams and get a shot at being a career football player. So I hope you all read this interview and follow Devon’s journey. Make sure you follow him on Twitter at @Vonn__Melik

1. If you could hang out with any football player past or present for a day who and why?

My favorite player Todd Gurley he is an amazing player and an even better person on the field.

2. Who is your favorite musical artist?

3. What is your mindset when you are on the football field?

Give 100% at all times. Do what ever it takes to put my team in the best position to win. That I’m the best player on the field.

4. If you were on a game show and won 100 thousand dollars what would you do with it?

Move my family out of the South Side of Chicago

7. Most interesting teammate from anywhere you’ve played and why?

Most interesting teammate would have to be my teammate in Dom he played corner his motto on the field was shooters shoot. While playing Corner every time the QB throws the ball he just dives at the WR’s legs and doesn’t think it’s wrong when he gets a flag.

8. What made you decide you wanted to be a football player?

When I was about two years old my dad and I would watch bears games every Sunday and I grew to love the game I never missed a bears game on a Sunday. Then as I got older I saw it as a way to give myself and my family a better life.

9. What is your favorite movie?

A team would get an all around player that can do everything. They will get a hardworking team player that would do anything to help the team win.

11. If you could live anywhere in the world where and why?

12. if you were an animal which animal would you be and why?

Tiger or Lion no one messes with them