Three 2020 Draft Picks to Bet on This Season 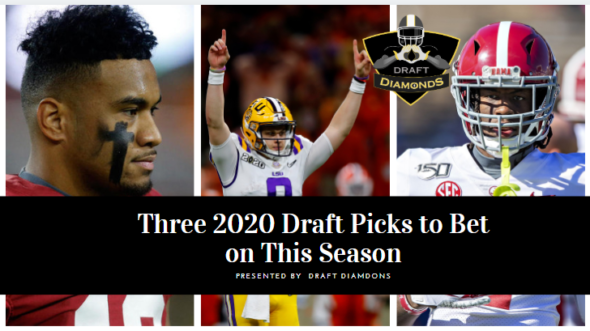 These three draft picks are the best to bet on in the 2020 NFL Draft!

The NFL draft has taken place, and we know the landing spots for some of the biggest names in college football. As ever, there was a lot of intrigue surrounding the offensive players in the draft, with teams aiming to find someone they can pin their future to.

We saw a handful of potential offensive stars go in the first round, and these players will be looking to make a direct impact when the 2020 season kicks off. However, who stood out and who can become a player who makes an impact straight away on their new franchise?

Here we take a look at three offensive players who look great players to bet on for success in their very first professional season.

Burrow was taken number one overall, which was no surprise to anyone who saw him play college football.

He comes into the NFL on the back of the best year ever by a college quarterback, which tells you the kind of pedigree he has behind him.

Andy Dalton is long gone in Cincinnati, this is now the time for Burrows to turn this franchise around.

While questions remain over their offensive line, there is no doubt Burrows will be a huge help to this team. Had they done more with that, through other draft picks or even free agency, we could be looking at a completely different unit, but that will come in time.

It would be no surprise to see Burrows jump out quickly and show what he is capable of, so look to back him for either yards or touchdowns in the early part of the 2020 season while teams are still figuring him out.

Drew Lock is tasked with turning the Broncos around. He has the weapons to do that! The latest to arrive is Jerry Jeudy, who should slot straight into the WR2 role opposite Courtland Sutton.

With Sutton and two outstanding running backs in Melvin Gordon and Phillip Lindsay, Jeudy isn’t going to get a ton of touches in 2020. However, he’s also not going to get a lot of coverage either, with teams having to spread themselves to cover everything Denver has to offer.

The Broncos could be about to make a big revival if Lock offers them solid quarterback play, something gamblers will be picking up on.

Jeudy is certainly a player to keep close tabs on this coming season, look for him in the receptions, yards and touchdown markets because he can make a splash.

You can find a list of odds & betting offers for NFL here, and it would be no surprise to see Denver amongst those people are betting on when things kick off.

Without injury concerns hanging over him, Tua Tagovailoa would have been much closer to Joe Burrows to be taken first overall. His success in Miami will depend on those injuries, but they’ve done all they can to protect him with their other draft picks.

Tagovailoa was the first of three first round picks they took, and they added two second rounders and a third rounder to those on day two of the draft.

They’ve given him help in front of him to try and limit the sacks he faces, while overhauling their defensive setup to try and get the ball back in better areas.

It would be no surprise to see the Dolphins start to turn things around this coming season, and Tagovailoa can be the lynchpin of that. Look to back him to get off to a good start by throwing touchdowns and eating up good yardage.