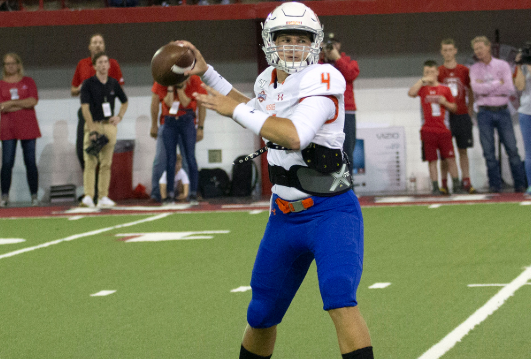 Bailey Zappe is one of the most underrated players in the 2021 NFL Draft.

The Victoria, Texas native was one of the top quarterbacks in the FCS last season. As a junior, Bailey Zappe completed  357 of his 560 passes for 3,811 yards and 35 touchdowns. After a standout junior season, Zappe was selected as a finalist for the Walter Payton Award, awarded to the nations most outstanding player in the FCS. The pro-style quarterback led the FCS in touchdowns, completions, attempts and ranked second in yards.

The 6-foot-2, 180-pound signal caller has been taking snaps under center since his freshman season in 2017. The true freshman appeared in 10 games, starting nine of them completing 1,548 yards for five touchdowns. Zappe then went on to start all 11 games as a sophomore in 2018, earning All-Southland Conference honorable mention.

Bailey has that “IT” factor

Just how good was Zappe last year? He threw for over 200 yards passing and one touchdown in all but one game last season. His 498 yard, 7 touchdown game against Texas Southern broke his own school records for completions(43), attempts(59) and touchdowns. The only quarterback that ranked ahead of him last season in yards was Northern Arizona quarterback Case Cookus, who signed with the New York Giants on April 28th, 2020.

Zappe is definitely a player to watch this season. The pro-style quarterback has the size and the arm strength to complete at the next level, but can he limit the turnovers? Through 33 games at Houston Baptist, Zappe has been picked off 38 times. This will need to improve!

Last year, Zappe was a beast for the Huskies. He has a big arm, and can spin it well. On film he makes all the hard throws. He does have some help at the wide receiver position, but this year I am expecting major strides. I have talked to several NFL teams about Zappe and they said if he can cut down on his turnovers he could earn a shot at the next level. – Damond Talbot, Owner, NFL Draft Diamonds