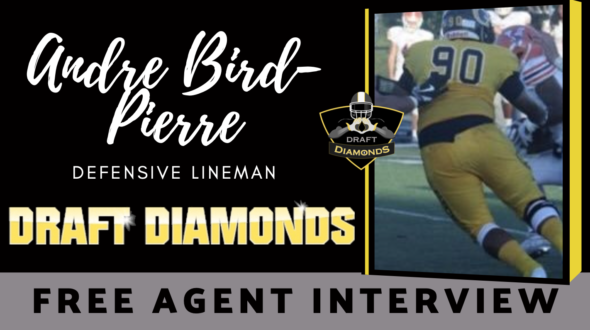 Hello, I am @jrberendzen on Twitter and this is one of my free agent interviews where I ask very deserving free agents questions about the players themselves and about what a team would get in these players. All of these players should get picked up by NFL and CFL teams and get a shot at being a career football player. So I hope you all read this interview and follow Andre’s journey. Make sure you follow him on Twitter at @AndreBirdPierre

1. Who is the most interesting teammate from anywhere you’ve played and why?

Caleb Thomas. Dude is a baller and motivator. Like I obviously have to motivate myself to become better but when I’m around him makes me wanna push myself further!

2. What is your favorite dinner?

Food. Honestly, if it smells and tastes good imma eat it. Guess that’s just a big boy’s life you feel me.
3. What is your mindset when you are on the football field?
Strap up and knock shit down. Nobody on that field is my friend at that moment especially if you got another color jersey on.
4. What is your dream car?
It would be between The Urus ( Lambo Truck) or Rolls Royce Phantom Coupe Black Badge Edition.
5. If you were on a game show and won 100 thousand dollars what would you do with it?
I would try and save most of it but invest in the gaming industry. With things like Fortnite and what it just did this past year, there’s a market that’s not really tapped into like that and is for sure a gold mine.

6. Who is your favorite musical artist?

Kevin Gates
7.If you were on an island and could only have three things which three things would you have?
Something to play music. Compass & knife with a fire starter.
8. What made you decide you wanted to be a football player?
I’ve been playing football for 7 years old and feel in love with it right away. I told everyone I would be a professional football player and looks at me. Just a few steps from making that dream come true!
9. Who do you model your game after?
Honestly, I don’t model my game after anyone I just go clock in clock out. However, I do want to be taught by Aaron Donald and Christian Wilkins.

Any team would get a player who is a team-first willing to put the team before me. And someone whose sole purpose on the defensive side of the ball is to hunt and kill. That’s what they are going to get from a player like myself.
11. If you could live anywhere in the world where and why?
I would stay in America but I would like to travel from country to country and maybe live in them from time to time but not forever.
12. If you were an animal which animal would you be and why?
I’d be an Eagle. Flys high and out of the way of people but when it’s time to hunt and kill I’m coming in fast with precision.
Related Topics2021 nfl draft2021 prospectsAndre Bird-Pierredefensive linemangracelandNFL Draft