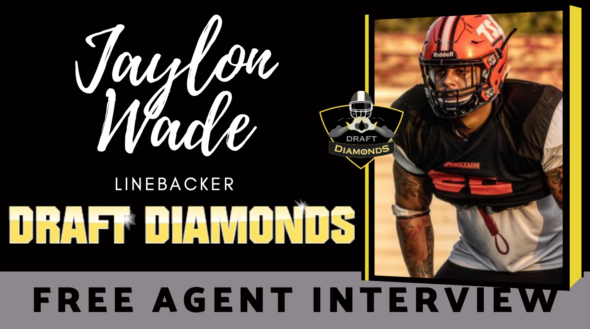 Hello I am @jrberendzen on Twitter and this is one of my free agent interviews where I ask very deserving free agents questions about the players themselves and about what a team would get in these players. All of these players should get picked up by NFL and CFL teams and get a shot at being a career football player. So I hope you all read this interview and follow Jaylon’s journey. Make sure you follow him on Twitter at @JayW_52

1.What is your favorite dinner?

Pasta, any restaurant that has good pasta in there lol

2.If you were on a game show and won 100 thousand dollars what would you do with it?

Invest/save half of that and with the other half take care of my family as much as I can.

3. What is your mindset on the football field?

Give my brother’s everything you got, I remember Ray Lewis saying one time that ” it’s tough beating 11 men all on the same page” when that happens offense might as well pack it up.

Really I’m simple I have fun working out and being active whether it’s going to the field, playing basketball. But I’m also nice on 2k so I get online an play with some guy I went to school with too.

5. Who is your favorite musical artist?

Favorite of all time would have to be Tupac I’m young but an old soul I love late 90s and early 2000s music.

Music, food and something to drink.

7.If you could pick one football player past or present to hang out with for one day who and why?

Easy, Ray Lewis. To me he’s the greatest football player and I feel like I could learn so much from him because we play the same position and I would love to pick his just learn. Also because he followed me on twitter.

8. What made you decide you wanted to play football?

Really I grew up as a basketball player like it was basketball and nothing else. But all my friends started playing and I still remember my Uncle Mike went and signed me up and basketball took a backseat ever since then. Also because I’m 6′ 2 and everyone gets to be like 6’6 so you realize football might be for you lol.

9. What is your favorite movie?

Favorite movie would have to be the Lion King.

10.What would a team get in a player like you?

Honestly they would get someone who would work and work, and then work some more. I have the most confidence in myself but I’ve never been the guy on everybody’s radar and the effort that I will give on the field nobody will be able to match me because that’s all I know.  They will get someone who knows that this can change my family’s life and for them there’s nothing I won’t do.  A player who’s gonna do whatever for the team to succeed I could go on and on but I’m pretty sure you get the point. I’m not trying to walk in the door I’m trying to kick it down to let you know I’m here.

11. If you could live anywhere in the world where and why?

I would want to stay in Michigan. Hopefully if I was able to play pro I would want to stay around the area and be able to show kids growing up that I come from a small city just like them and walked to the streets, went to the same stores, went through the same things that they go through but no matter what you can make it.  That’s what it’s all about with me just giving back to where I’m from just because without Pontiac, MI I would not be the person I am.

12. If you were an animal which animal would you be and why?

Lion, I would say that because they are real family oriented. They realize that a team effort is the best way to accomplish anything but can handle themselves if they get caught by themselves.  They are also thinkers every attack is planned out and on defense we like to hunt we don’t like to wait for anything to come to us we like to go get it.