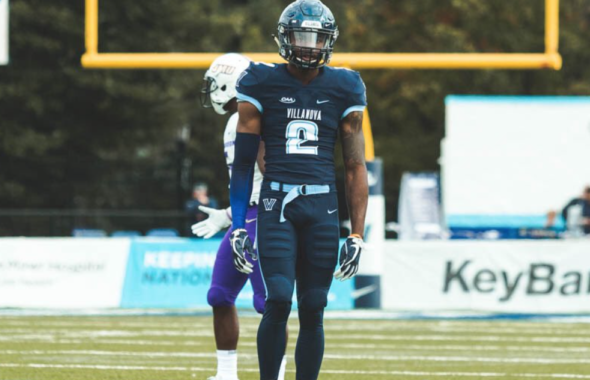 Changa Hodge is one of the best small school wide receivers in the 2021 NFL Draft.

The 6-foot-1 200-pound Wide Receiver balled out last season for the Wildcats. Changa Hodge tallied 65 catches for 1118 yards and 13 touchdowns last year, becoming the first Villanova Wildcat to top 1,000 receiving yards in a single season since 1999.

Hodge capped off a monster regular season with a career-high game against the Delaware Blue Hens. The big play receiver finished with eight receptions for 236 yards and four touchdowns, including a 82 yard score in a dominating performance. Through 13 games last season, Hodge had over 100 yards receiving in 5 contests. His 13 touchdown receptions was tied for sixth among all FCS receivers.

Hodge was a big playmaker last year for the Wildcats, which was huge after battling injuries over the last few seasons. If he can stay healthy this season his draft stock will rise through the roof. He has the speed and size to transition from Saturday to Sunday’s. The East Stroudsburg native bursts by defenders with ease last season creating a nightmare for opposing defenses. The Villanova offense is expected to dominate this coming up in the FCS, with Hodge playing a huge role in doing so.

Changa Hodge reminds me a lot of John Brown. He is a speedy receiver with great hands.  He has big play making ability and seems to always come through when Nova needs him the most.  He has had to battle some injuries, but NFL teams are paying attention.  His route running is solid and his elusiveness is next level. I am a fan! – Damond Talbot – NFL Draft Diamonds Owner