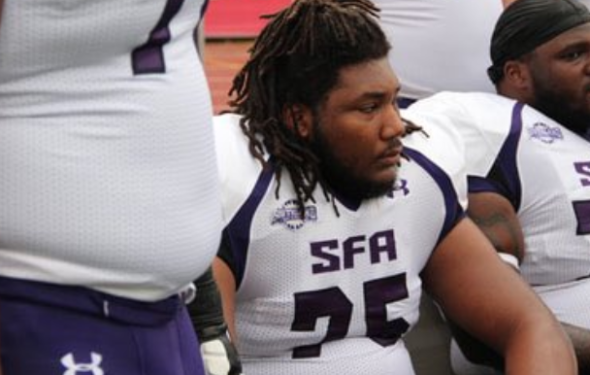 Josiah Hunter of Stephen F. Austin is a big boy who is a mauler on the O-Line

•    Name: Josiah Hunter
•    Height: 6’5
•    Weight: 315
•    Position: Offensive tackle
•    College: Stephen F Austin State University
•    Twitter: jo_hunter75
Tell us about your hometown, and what you love most about it?
List these three in order of importance and why: Film Study, Strength and Conditioning and Practice?
What do you worry about, and why?
Give me an example of when you failed at something. How did you react and how did you overcome failure?
What do your teammates say is your best quality?
Who is the best player you have ever played against in college?
What would your career be if you couldn’t play football?
Room, desk, and car – which do you clean first?
If there was a disaster and you could either save three strangers or one family member, which would you choose and why?
If you could be any television or movie character, who would you be and why?
Tell me about your biggest adversity in life and how you’ve dealt with or overcome it?
What is your most embarrassing moment?
What was the most memorable play of your collegiate career?
What song best describes your work ethic? 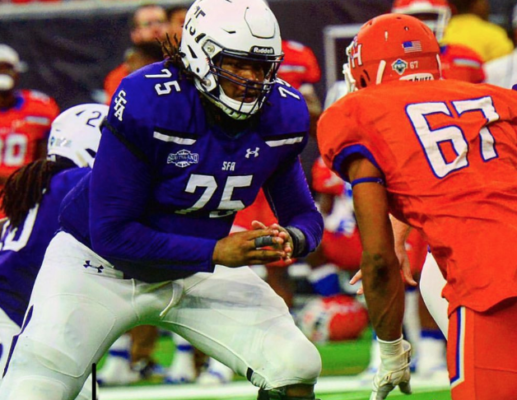 What is the most important trait you can have (Physical or Non-Physical) to help you succeed at the next level?
If you could bring one person back from the dead for one day, who would it be and why?
If you were to open a dance club, what would you name it?
Who is the most overrated player in the NFL?
Would you rather be liked or respected, and why?
What player who had his career derailed by off-field issues do you feel for the most and why?
Do you love to win, or hate to lose?
Who has been the biggest influence on your life and explain why?
Related TopicsfeaturefeaturedJosiah HunterNFL DraftNFL Draft ProspectSFAStephen F Austin