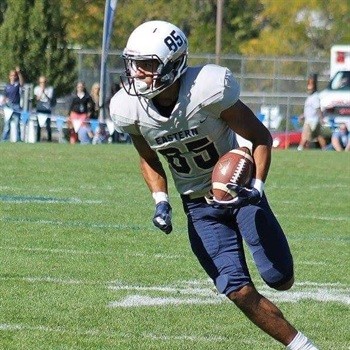 Brenden Kelly of Eastern Oregon is a beast on the football field. I love this kid’s film

Tell us about your hometown, and what you love most about it?
•    I am from the Tri-Cities in Washington. I love the Tri-Cities because it made me who I am today, with the experiences I’ve had and the people I’ve met. It’s also not a huge city but not to small either. And there is always a place to eat.
List these three in order of importance and why: Film Study, Strength and Conditioning and Practice?
•    Practice, then Film study then Strength and Conditioning. Practice because the best way to better yourself at something is with repetition and practice. Then film study because football, especially at a higher level is more mental and being able to know your opponent’s strengths and weaknesses can give you an advantage. Then strength and conditioning because you have to be able to perform at a high level during the game.
What do you worry about, and why?
•    Not being able to support my family.
Give me an example of when you failed at something. How did you react and how did you overcome failure?
•    I’ve failed at many things in life but instead of taking it negatively I use it to my advantage and learn from it to better myself and then possibly teach others.
What do your teammates say is your best quality?
•    My work ethic and being able to lead by example.
Who is the best player you have ever played against in college?
•    That’s hard to pick, I’ve played against some good guys. The person I probably would have to pick I actually played with and not against and that would be Jace Billingsley
What would your career be if you couldn’t play football?
•    I would like to coach but I’d also like to have my own business.
Room, desk, and car – which do you clean first?
•    Whichever one is dirty. I like to keep things clean and organized so if something gets dirty while I’m using it I make sure to clean up afterward.
If there was a disaster and you could either save three strangers or one family member, which would you choose and why?
•    Blood is thicker than water, I’d have to save my family member.
If you could be any television or movie character, who would you be and why?
•    Bradley Cooper’s character in the movie Limitless. Having the ability to gain that much brain power would be pretty amazing and I would definitely use it to help people.
Tell me about your biggest adversity in life and how you’ve dealt with or overcome it?
•    Probably the birth of my daughter and continuing to stay in school and play football while also working. To overcome it and be successful at all of them it took lots of sacrifices, time management, and hard work and in the end just determination.
What is your most embarrassing moment?
•    When I threw up on my teacher’s leg in 3rd grade.
What was the most memorable play of your collegiate career?
•    I have had a couple. Throne that stands out, in particular, would probably be my gaming winning TD against Carroll College in overtime.
What song best describes your work ethic?
•    Ambition- Wale ft. Meek Mill & Rick Ross
What is the most important trait you can have (Physical or Non-Physical) to help you succeed at the next level?
•    My coachability and my work ethic.
If you could bring one person back from the dead for one day, who would it be and why?
•    Muhammad Ali. He is one of my role models because of his work ethic, his determination to be great and his courage. It would be amazing to just sit down with him and talk and learn some things from him.
If you were to open a dance club, what would you name it?
•    The Krazy 8 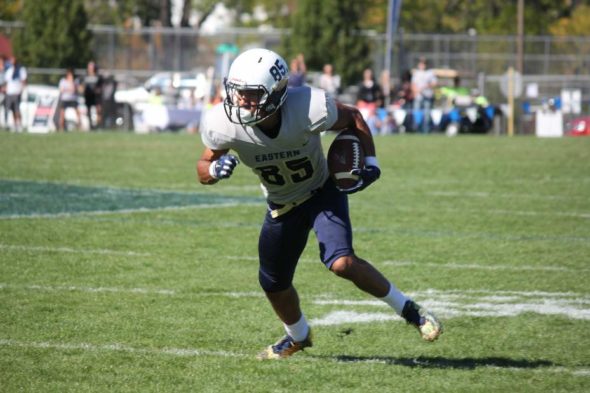 Who is the most overrated player in the NFL?
•    I don’t believe I really have a valid say in that because those guys play at that level for a reason. It’s easy to see the negative things and form an opinion watching from the outside.
Would you rather be liked or respected, and why?
•    Respected. I feel like respect will get you a lot further than somebody like you.
What player who had his career derailed by off-field issues do you feel for the most and why?
•    I would probably have to say, Sean Taylor. He only got to play 4 years in the NFL. Because of his murder, nobody really got to see him reach his full potential and see everything he would accomplish in the NFL. Players still say he was one of the greatest Safeties ever to play the game.
Do you love to win, or hate to lose?
•    Definitely, hate to lose. That’s what drives me to win. I am a competitive person.
Who has been the biggest influence on your life and explain why?
•    My daughter. Having a child gives you a new meaning in life. Everything I want to do an achieve is not only for myself now, but is also for her. Decisions I make don’t only affect me in a positive or negative way, but they also will affect her.
Related Topics2019Brenden Kellyeastern oregonfeaturefeaturedNFL Draftnfl draft rumors