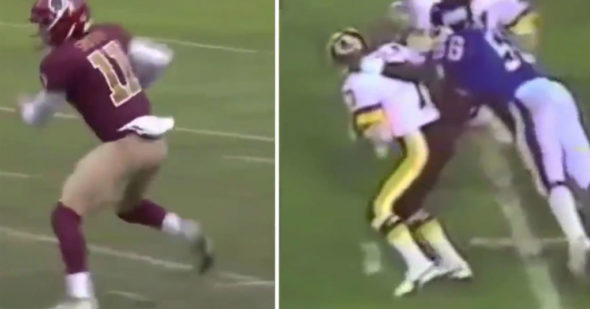 These injuries are too similar to one another. Kind of scary….

We all remember the Joe Theismann broken leg because it was one of the most graphic leg breaks in the history of the NFL, but this past weekend’s injury of Alex Smith maybe just as bad.  When you look at the similarities of the injury though it is scary.

Joe Theismann broke his right tibia and fibula on Nov. 18, 1985 in a game in Washington that ended 23-21. The only three-time Defensive Player of the Year Lawrence Taylor was involved in the injury, which occurred around the 40-yard line. Theismann’s Pro Bowl left tackle, Joe Jacoby, wasn’t on the field due to injury.

Alex Smith broke his right tibia and fibula on Nov. 18, 2018 in a game in Washington that ended 23-21. The only other three-time Defensive Player of the Year J.J. Watt was involved in the injury, which occurred around the 40-yard line. Smith’s Pro Bowl left tackle, Trent Williams, wasn’t on the field due to injury, per Touchdown Wire.

After the game, Joe Theismann himself was asked by TMZ about the injury and he said he felt bad and ever offered a few more similarities.

“It was I think 166th game for Alex. Mine was 167. Basically, the same place on the field. Heck, I have a nephew named Alex Smith who’s 33-years-old … the whole thing is crazy.”

Theismann says for the first time in his life, he couldn’t really sleep after watching the injury in person — saying, ” I didn’t really think this thing had bothered me as much as it did, and I think it probably got to me a little bit more.”

This sounds crazy, because the similarities are so close to one another.