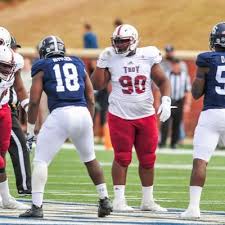 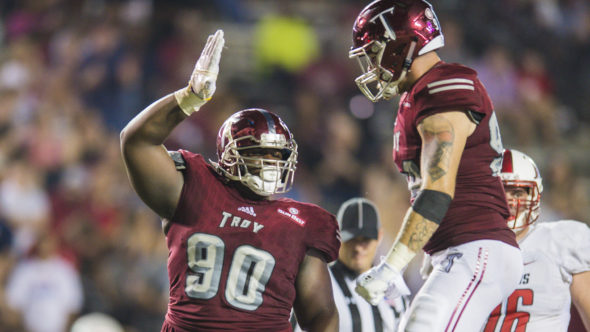 Don’t let the fact Sanders is 327 pounds fool you into thinking he can’t move.

In fact he moves just as well if not better than most his 300 pound counterparts even having success getting around the edge in certain situations.

Stout strong pocket pusher who has a low center of gravity gets low & powers through guards to get unto the back field.  A true NT with that bulldozing power to shoot the A gap & play that 2 down role.Keeps his shoulder pad level below blockers keeping his knees bent & feet rapidly moving uses his lower body extremely well. Long arms  with a nice arm extension & big strong hands can use them too shed blocks on the inside or even on the outside, which is impressive for a DT of his stature.

No reason he can’t be on the field on pass downs with his ability to consistently get in the QB’s line of vision create pressure or get those big paws up on pass deflections.

This draft is filled with DT’s & DL in general but you would be hard pressed to find one with the size agility & athleticism of Sanders. Especially when your looking at a potential UDFA  type player every team 34 & 43 alike need on run downs & short yardage situations. He plays in a rotational DL in College the Trojans have a pretty good D with at least 3 potential 2019 NFL draft prospects on D . Sanders is the biggest sleeper of the bunch because he is not on the field as much as the other 2 but in limited action he has shown the ability to get behind the line using not only his tremendous frame but his quick feet & athletic movement skills.