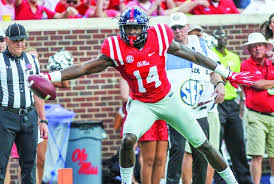 D.K. Metcalf is one of the most talented wide outs in the nation. He has what NFL teams want.

Alabama Quarterback Tagovailoa uses his superior accuracy, strong arm and outstanding vision to locate open Receivers.  His passing skills set is the best among all College Quarterbacks.  Tagovailoa has good size at 6′ 1″/218.  He has completed 76 passes for a completion percentage of 75.2% for 1,495 yards and 18 touchdowns with no interceptions, for an impressive Passer Rating of 258.4through six weeks into the 2018 College Football season.  Tagovailoa is the best Quarterback in College Football who displays exceptional leadership skills well beyond his years.  As a Sophomore after 6 games, he is NFL ready right now, and in the 2020 NFL Draft he will be the first QB taken within the top 10 NFL Draft picks.

Mississippi Senior Quarterback Jordan Ta’amu, 6′ 2″/212 leads Mississippi’s talented group of Wide Receivers.  Quarterback Ta’amu has completed 120 passes for 1,911 yards with a completion percentage of 64.2% for 13 TD’s and 4 interceptions, with a Passer Rating of 168.7 through the first 6 weeks of the 2018 College Football season.

West Virginia Senior Quarterback Will Grier, 6′ 2″/215 is the leader of four very talented Wide Receivers.  Grier could be drafted in the first round or at the top half of the second round of the 2019 NFL Draft.  He has good size and enough arm strength for the next level, but not ideal NFL Quarterback size.  Grier has put up impressive Quarterback stats for a Collegiate Quarterback.  During the first 6 weeks of the season, Grier has completed 126 passes for 1,819 yards with a completion percentage of 71.2%, including 21 TD’s and 6 interceptions, with a 189.9 Passer Rating.