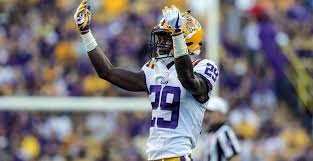 Greedy Williams is one of the best cover corners in the Nation. Who is James Watkins first rated cover corner though?

Georgia First Team All American Deandre Baker, 5′ 11″/180 is College Football best shutdown, cover Cornerback.  Baker has 21 Tackles, 6 Passes Defended, 2 interceptions, and 1 forced fumble through the first six weeks of the 2018 College Football season.  Highlight film of Baker displays his tenacity and fearless playing style, coupled with exceptional shutdown coverage skills and with very good run support and tackling skills.  Baker should add more weight in the form of muscle to better compete in the NFL against taller, more physical NFL Wide Receivers.  However, Baker’s cover skills are paramount and ideal for success at the NFL level.

LSU All American Andraez (Greedy) Williams, 6′ 2″/182 is the second best shutdown, cover Cornerback in College Football.  Williams has 18 Tackles with 2 interceptions, and 2 passes defended.  Williams has been hand-timed in the 40 at 4.2 according to LSU Football Coaches, therefore, he’s faster than Georgia’s Deandre Baker.  A legitimate 40 time will be taken when Greedy Williams attends the NFL Combine, since 40 Dash hand times are not official and inaccurate.  However, Williams’ exceptional speed should greatly benefit him in the remainder of his College Football career, and into his NFL career.