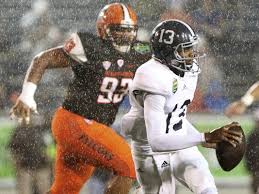 Shannon Smith is out of Chicago Illinois was a 3-star prospect coming out of high school, was recruited by Northwestern, Indiana, Purdue, Ball State, and Bowling Green State University. At bowling green, he had a decent career 76 tackles, 6 sacks throughout his career. After his career at bowling green, he didn’t receive any invites to NFL camps so he took his talents overseas and played for the Kirchdorf Wildcats of the GFL Tier 1. When he played over there he dominated the competition. In his 1st season, he recorded 9 sacks, 17 TFLs and had 55 tackles in the process.

His film pops out because of his explosiveness off the ball. He shows a great use of his hands when in pass rush. He has great hip power when he is engaged with an offensive lineman. He is able to work pass rush moves off of the bullrush.  He shows off his speed when chasing down the ball carrier. Brute strength, cant be blocked one on one. Can take on double teams and still make the play.