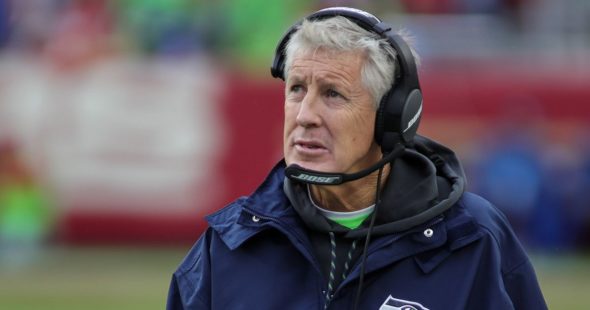 With all the hot seat speculations for Michigan Head Coach Jim Harbaugh, it’s time to move on from the coach that thinks eating chicken makes you a chicken (no pun intended). When it comes to a popularity contest I think he is the best coach in college football, but you don’t win games by having the “Migos” on campus for national signing day, taking trips around the world, and appearing in music videos. You win at Michigan by beating Ohio State University and Michigan State. You win by going to going to big bowl games and winning them. He has underachieved in those aspects. He is the most overrated coach in college football due to having a top tier recruiting class year after year and not producing.

Having gone 28-11 through his first 3 years at Michigan is good, but when you go 0-3 against Ohio State, 1-2 against Michigan State, and 1-2 in the Bowl games with a loss to Notre Dame, but was lost because of piss poor play calling it is hard to support the former Niners coach. Harbaugh has been getting a lot of heat from the media including ESPNs own Tim Tebow, who went on First take last week and said: “I’ve got to be honest, last week I was kind of shocked. I expected more from Michigan. I expected more from Shea Patterson. I expected more from their offense. Honestly, I thought it was kind of pathetic. I thought their effort was. All of their recruiting, their talent… and that’s the way you showed up against Notre Dame, who I also think is a little bit overrated? You’ve got to give me more than that. You’ve been there. You’ve recruited your guys. Now this is your chance to make a statement to show the type of coach you are, that you’re worth all that money they gave you. That you’re worth all of these trips to Paris and everywhere else. I think it’s cool you take trips, but the most important trips [are] when you go get a ‘W,’ big guy. So you’ve got to get that done first.”

Even Former UM football player and current Big 10 analyst Braylon Edwards had some words about Michigan’s effort against Notre Dame when he had explicit tweets to inform the people about Harbaugh and his team. Not to worry Wolverine Nation your solution to all your problems is standing on the sidelines in Seattle with the Seahawks. Yes, Pete Carroll! Pete Carroll should be the Head Coach at Michigan. Pete Carroll and the Seahawks are not on the best of terms, they lost their mystique ever since the Super Bowl and the 2-yard line incident. Pete looks exhausted their and he looks like he’s losing the organization.

He has also had success in college football at USC and winning two national championships. He even won a Super Bowl in the NFL. Colleges may not touch Carroll because of what happened at USC but if everyone do there due diligence and read the facts of what happened you would know Pete did nothing wrong and the sanctions were out of hate and jealously of what USC was able to accomplish. Listen UM fans I feel your pain just listen to me and think about. He was a successful recruiter at USC and turned them into college starts and 1st rounders.