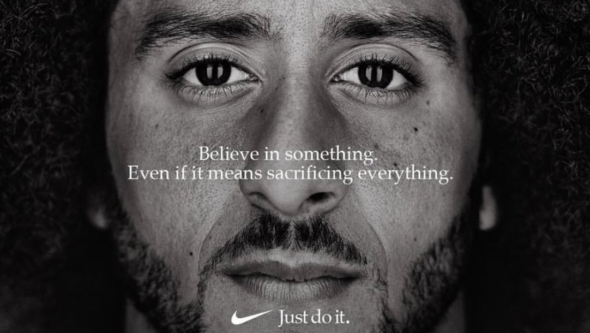 Colin Kaepernick is the face of Nike‘s latest ad campaign, two years after kneeling during the national anthem made him the face of protest in the NFL.

Kaepernick tweeted an image from Nike’s new “Just Do It” campaign on Monday. The advertisement features a close-up shot of the quarterback’s face and reads, “Believe in something. Even if it means sacrificing everything.”

According to Darren Rovell, Nike has been paying Kaepernick all along waiting for the right moment to unleash the ad.

BREAKING: Nike had been paying Colin Kaepernick all along, waiting for the right moment. That moment is now, as he becomes the face of the company’s 30th anniversary of the “Just Do It” campaign. pic.twitter.com/uccpDStbq5

Kaepernick has been endorsed by Nike since 2011, though the company has, until now, stayed quiet about his history of protest.