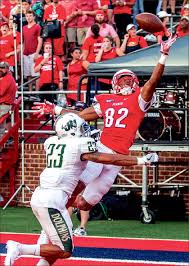 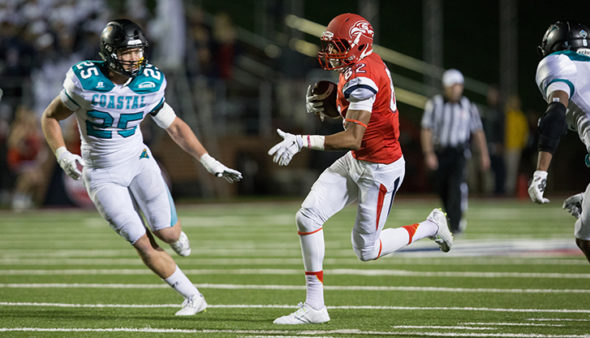 Farrow is a player that can take the top off a D & be an exciting return guy.

Has the speed & enough size to play both outside & in beats DB’s with his legs gets big time separation. Does well over top of a D but that doesnt mean he can not play underneath.  Good route running & vision make him a value in the pass game with strong hands as well. Big play threat can get 10 – 15 yd jump on quick DB’s in a heartbeat.

When a small school scout thinks of a wideout prospect from Liberty the name Gandy Golden  comes to mind first & foremost. He is a special player & a topic for another time but Farrow is not a player I would discount because of the play of a teammate. Farrow is a much different type of WR that will beat you with his sheer speed.  Would be a nice Y or slot option in pro offense or be a day 1 special team standout. Fluidity in his route running, cuts navigating his way thru defenses without incident. Explosive change of direction & burst, spectacular sideline presence can take a basic quick sideline pass to the house with his quickness, agility & balance on the edge of the turf.   Good frame in his own right with above average reach & athleticism. Wide shoulders with a above average wingspan.

Liberty has a top flight WR corp with several guys that could have pro aspirations. Farrow needs to set himself apart from the pack.  If he could have another couple breakout games like the one against MoreHead State with 177 yds & 3 TD’s he can do just that. Getting him involved in the punt return game helps his cause as he has the top end speed to succeed in that roll.  Consistency is something I would like to see more of this season with a good looking O of Liberty. Farrow shows he could be a special player at times but disappears at times as well. Would like to see him contribute on a weekly basis whether that be threw the air or in the return game he is a perfect yang to Gandy Goldens yang. The duo could be something to see as the season progresses in the Big South.