If Buffalo Bills start Nate Peterman they may lose their fanbase 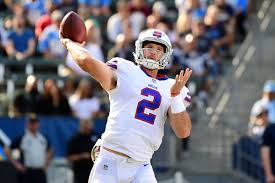 I am a diehard Buffalo Bills fan, and while I was pumped up to make the playoffs last year, I have to admit I was pissed after yesterday’s performance.  The Buffalo Bills walked into Baltimore and laid down.  The Bills started Nate Peterman, and he looked pitiful.  While he was dominate in the pre-season, he looked absolutely lost yesterday against the Ravens.  The Ravens defense was in the backfield all game.  They had 6 sacks but could have had more.

Yesterday the Buffalo Bills fed Shady McCoy 7 times in the run game, and 1 in the passing game.  The Bills have not been able to find a way to get a player open.  Their wide receivers are non-existent and their starting tight end is SUPER OVERRATED.

You maybe asking yourself what is he getting to, well let me finish.  The Buffalo Bills hired a new offensive coordinator, and everyone says they like his playcalling, I am still thinking he is suspect. Buffalo Bills have a playmaker in 30 year old LeSean McCoy, if he is not getting the ball more than 20 times in a game, you should fire yourself. Last year the Bills were able to get to the playoffs because of Shady McCoy. He won the Bills many games, this year they made him a Captain, but the team failed to give him the ball.  It is real simple, if you are going to pay Charles Clay and Lesean McCoy tons of money, utilize them or trade them.

Bills have major problems right now and while I feel bad for Nate Peterman, there is absolutely no way they can go back to him this week against the Chargers at home and not get booed off the field. The last time Nate Peterman faced the Los Angeles Chargers he threw 5 interceptions. After his performance last week you have to let the rookie go out there an throw the ball around.

The Buffalo Bills need to play their rookie Josh Allen. The Bills fans want to see what he is capable of doing, and while the Bills coaches may feel he is still a little ways off from being the starter, they need to let him throw the ball around.

Right now the Bills are 7.5 point underdogs at home.  That means Vegas feels the Bills will lose by 10.5 points at least. How can you play Peterman and not get booed?  If the Buffalo Bills start Nate Peterman I am not sure if Bills head coach Sean McDermott is not booed off the field.  This team deserves better, and with all the problems they have above, the Bills need to let their rookie play.  This year is going to be bad anyway. Might as well throw him to the wolves.