Donald Trump is at it again. He is trying to rally his followers to petition against ESPN after the Sports Broadcast Network decided it would not play the National Anthem live on their show.  Trump became upset with the reasoning behind ESPN not playing the National Anthem and sent out an email for people to protest against the movement. 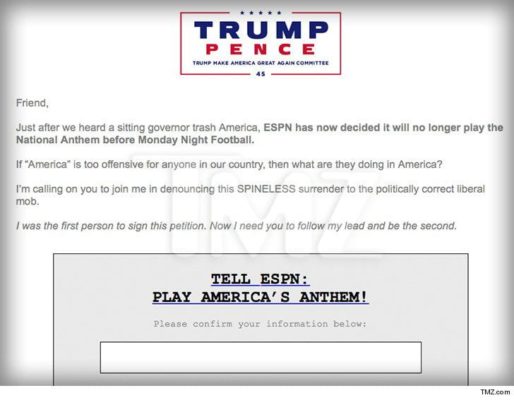 Trump’s email continues … “If ‘America’ is too offensive for anyone in our country, then what are they doing in America?”

“I’m calling on you to join me in denouncing this SPINELESS surrender to the politically correct liberal mob. I was the first person to sign this petition. Now I need you to follow my lead and be the second.”

Trump began railing against ESPN at Tuesday’s rally in West Virginia — where he told the crowd, “It was just announced by ESPN that rather than defending our anthem, our beautiful, beautiful national anthem and defending our flag, they just won’t broadcast when they play the national anthem.”