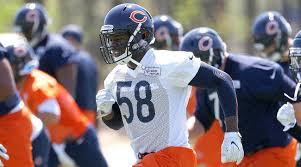 Every NFL Draft pick has now been signed. The final player in the NFL draft has been signed. Roquan Smith the Bears linebacker who was holding out has now inked his deal.

The first-round pick agreed Monday to a $18.4 million contract that includes $11.5 million guaranteed, according to Ian Rapoport of NFL Network. Like all rookie deals, the four-year contract includes a team option for a fifth season.

Head Coach Matt Nagy told reporters Sunday he believes Smith missing camp could have a detrimental effect that lasts into the regular season.

“But I have full confidence in [defensive coordinator] Vic [Fangio] and his staff that, when [Smith] does get here, they’ll get him up to speed,” Nagy said. “… That’s why we all get paid as coaches — to try to help our players out as much as possible — and that’s kind of where we’re at.”