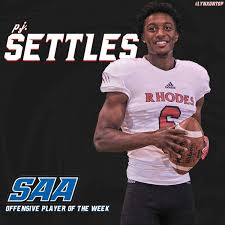 I always listen to a certain song before I sleep the night before, but I can’t tell you what it is.

Dwyane Wade is my role model because he’s a Hall of Famer on the court, while being an incredible father.

My favorite has been Civil Rights Movement with Dr. Charles McKinney. My least favorite was Infectious Diseases, simply because I am not a science guy.

Some of the most fun I had was Rites of Spring with Waka Flocka in 2017.

I was huge Titans fan, so any of the greats from there. My favorite was probably Chris Johnson not only because he broke the 2k mark, but also because of his speed and different swagger.

I would definitely be Rev in Remember the Titans. If it were a non-sports movie, I would be Chris Tucker in Rush Hour.

Besides Jesus, I would meet:

I would meet Muhammed Ali because of his charisma and boldness. I would like to have a discussion with him about religion, race relations, and how to approach competition.

My favorite superhero is Batman, because he is fearless, wealthy, physically superior (also a ninja), and smooth. I’m a Marvel guy though.

Hard work is when you continuously approach every workout, mental rep or meeting with the purpose to progress in some area. Then meeting that goal.

I have learned what my purpose in life is, and that is to ultimately glorify God through my academics, sports and relationships. I have also learned how to achieve success, which is setting a clear goal, outlining the steps to take, and being disciplined enough to follow them.

I would tell myself not to worry about rankings, numbers or naysayers, but think about my own progress and development while having as much fun as possible.

I would wear #5, but it is retired at Rhodes, so I chose #6. However, I think it is a somewhat unique number because not many greats have worn it, except for Lebron, Bill Russell and Dr. J.

What is the best part of your hometown, Nashville, TN?

Nashville is rapidly growing, which I think is its best attribute because it brings more diversity, better infrastructure, and great food. However, it does bring too much traffic and the cost of living is increasing.

Lebron all day! He is the BEST player of all time on and off the court, but Jordan’s legacy is nearly untouchable, not only because he went 6/6, but also because of his brand.

I grew up playing Nintendo and Playstation (1,2 and PSP), but I currently have an Xbox One. I play Fortnite, Madden, 2k, and Far Cry 4.

My most memorable moment has been breaking 7 records junior year, while maintaining a 3.8 GPA.

I love music, so I like to sing, play the trombone, piano, drums, and make beats. I also love to draw.

If there is a book written about P.J. Settles, what is the title?

“Follower of One, Leader of Many”

On Netflix I watch “F is for Family”, “Riverdale”, “Stranger Things 1&2” and “Black Mirror”

I would do some type of art, such as drawing or making music

If you could throw a TD to any NFL WR/TE, past or present, who would it be & why?

I would throw to Odell Beckham Jr. because A) it would be easy, and B) the celebration would be crazy.

What are the goals for 2018, both individually & for the Rhodes College football team?

If you could give NFL scouts three words to describe the type of man they are getting in P.J. Settles, what would they be?