People are fed up with the President tweeting about the NFL; The Anthem too 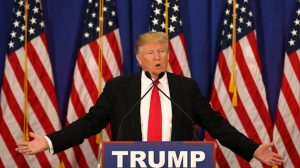 If I was paid a dollar for everytime I was told to stick to football, I would have like 40 dollars in my pocket.  Well Donald Trump would have like 500k dollars in his.  Today, Yahoo Finance posted an article about Donald Trumps’ tweeting of the NFL, and 59 percent of the people are sick of the President tweeting about the NFL.

In an exclusive Yahoo Finance poll conducted by SurveyMonkey, six in 10 Americans (59%) said they disapprove of Trump’s NFL tweets, while 38% said they approve of the tweets. Of those who disapprove, 46% “strongly disapprove” while 13% just “somewhat disapprove.”

That is not the only thing the fans are sick of. According to another question asked, the fans are also sick of the player protests.  Check out these numbers below:

Responses fall along predictable political lines: Republicans widely approve of Trump’s NFL tweets (75%) while almost all Democrats disapprove (90%). However, Republicans and Democrats agree on their disapproval of the NFL’s handling of the protests, though Republicans are slightly more likely to disapprove (by 81% to 64%).

That is not alot of people polled, but it still is interesting to see the results.