Broncos GM John Elway says his team offered Kaepernick a contract, but left out some details 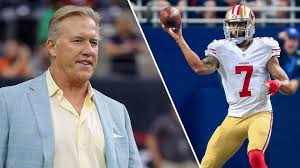 Today a report came out from James Palmer that Denver Broncos general manager John Elway said Colin Kaepernick was offered a contract once before by the team, but he failed to accept it, so they moved on.

This is the exact quote, but there is something missing.

Elway on Kaepernick as an option for a vet backup QB spot: “Colin had his chance here. We offered him a contract. He didn’t take it. So, As I said it in my deposition, I don’t know if i’ll be legally able to say this, but he’s had his chance to be here. He passed it”

While the Broncos were in fact looking to trade for Kaepernick, Elway is leaving out a huge part of the problem.

The NFL is continue to bury itself in this collusion case. They might as well just offer Kaepernick a monster settlement because they are going to lose their butts on this deal.