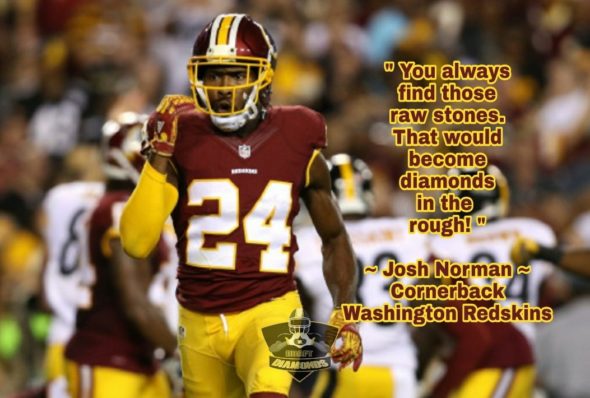 In an interview with Kevin Clark of TheRinger.com, Josh Norman the Redskins star defensive back, had some choice words for the Nation’s president. Norman was very vocal about ignoring the President.  Norman is echoing the same message as Aaron Rodgers who said last week that the players should just ignore the Don.  Norman said this:

“You continue to do what you do, because guess what?” Norman said. “You have a product, and that product is f–king banking. It’s the no. 2 product in the world outside of soccer — you cannot beat it. Those checks will keep coming regardless of what you do. I wouldn’t tell them to do a f–king thing. This guy is going to out of office in two years. I think we’ll be OK. Trust me: The accounts will be fine. I wouldn’t put emphasis on it. Because the fans are going [to] come. It’s not like you’ve got scabs on the field like in 1987. So what if it’s a down year? Who gives a f–k? Next year you’ll be great. It’s not going to catastrophically disappear because one guy said something.”

Norman does have a point, the NFL players are making more and more money every year, and if they consider themselves the product, they are going to be just fine.