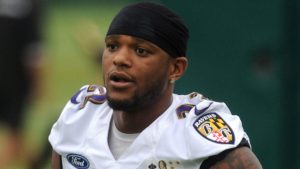 Jimmy Smith will be suspended the first four games

Baltimore Ravens have suspended cornerback Jimmy Smith for four games after finding him guilty of emotional abuse and threatening his former girlfriend. According to the Athletic, Jimmy Smith was suspended for six games, but it was overturned to four games. Jimmy Smith will be able to return after Steelers week. First game eligible is against the Browns on Oct.7. He’ll miss games against Bills, Bengals, Broncos and Steelers.

In a statement, Ravens say that the “NFL found evidence of threatening and emotional abusive behaviors by Jimmy [Smith] toward his former girlfriend that showed a pattern of improper conduct. Our player’s behavior was inappropriate and wrong.”

Ravens say they consulted with relationship and domestic violence experts and convened a group of Ravens women and men execs, not directly involved with football operations. “As a result of this entire process, we will allow Jimmy to return to our team after his suspension.”

Statement from Jimmy Smith: “I would like to sincerely apologize to my former girlfriend, the NFL, the Ravens organization, my coaches, my teammates, my fiancée and all our fans. I’m very disappointed that my past actions have led to this suspension.”

More from Smith: “I believe I am, and will continue to try to be, a better person and a better father because of this. I am committed to being the best I can be, both on and off the field. … I take full responsibility for my past conduct.”