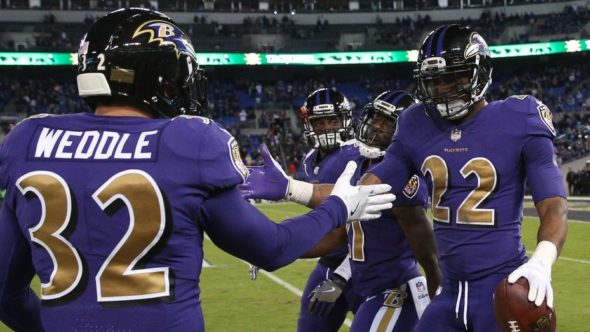 We reported the other day that Jimmy Smith was suspended for four games because he caused emotional distress to his ex-girlfriend.  My website blew up because it was the first time a player was suspended for causing emotional distress on a female.  We all remember Ray Rice uppercutting his wife, but this was name calling and arguing and a threat according to reports.

“It’s hard to fathom arguing with your [significant other], never touching her and that gets you a suspension like this,” Weddle told the Baltimore Sun.

Smith was punished by the league after an investigation showed he used “threatening and emotionally abusive behavior” directed at his ex-girlfriend. Smith claims he never touched her, per TMZ Sports.

Weddle claims there was “never a physical confrontation.”

“I know details of it that I can’t get into, so I just feel bad for him. And it’s hard for a guy put into that spot, where he can’t really stand up for himself and tell the truth. Because if he does, it’ll be a lot worse in the grand scheme of things.”

“Everybody goes back to Ray Rice and the video coming out, and they don’t want that to happen,” Weddle said  “I know for sure that was obviously on their mind.”

Weddle has a point, but I want to see what you think. Was this suspension overblown? The NFL was going to suspend him for six games, but it was dropped to a four game suspension.