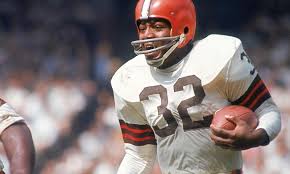 The last thing the NFL needs is to worry about politics but it is kind of hard to avoid now-a-days with social media.  Donald Trump is a beast on Twitter, and calls out everyone. While Trump has stuck his nose into football and tries to tell the owners how to run the league, one former player is sticking up for him. Jim Brown, yep the last person you would have imagined, but today he went on record saying he is pulling for the President.

“I should be criticizing Trump on every level because he does certain things that call for criticism but when I look at television I see all these announcers become experts and they’re pointing the fingers and they’re not doing a doggone thing but pointing their fingers, I find myself really pulling for the president.”

“Now, that would make me very unpopular in the black community, very unpopular with a lot of Americans … but I think that there are certain good things that are coming out of this Presidency because we’ve never seen anything like it.”

Brown addressed the kneelers and the people who believe he is not a good American.

“I believe that I have to work on myself first to be as good a person as I could be to back up my country as best as I know how.”

“And the second situation I should be helpful to those people who need help that don’t have life as good as I have it and if I do those two things, I think I’m making my contribution.”

I want to know what you think of these comments. Do they upset you or does he make sense? Let us know on Twitter.