Jerry Jones failed to remove his hat during the National Anthem; Then declines to comment 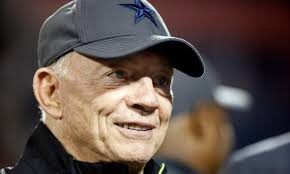 Today Jones was asked about why he failed to remove his hat and if he wanted to comment and he quickly said No, No, No.

This got interesting pretty quickly. What do you think? Should the owner take his hat off?