Jalen Ramsey goes off on the QB’s around the NFL; One is trash and a star overrated? 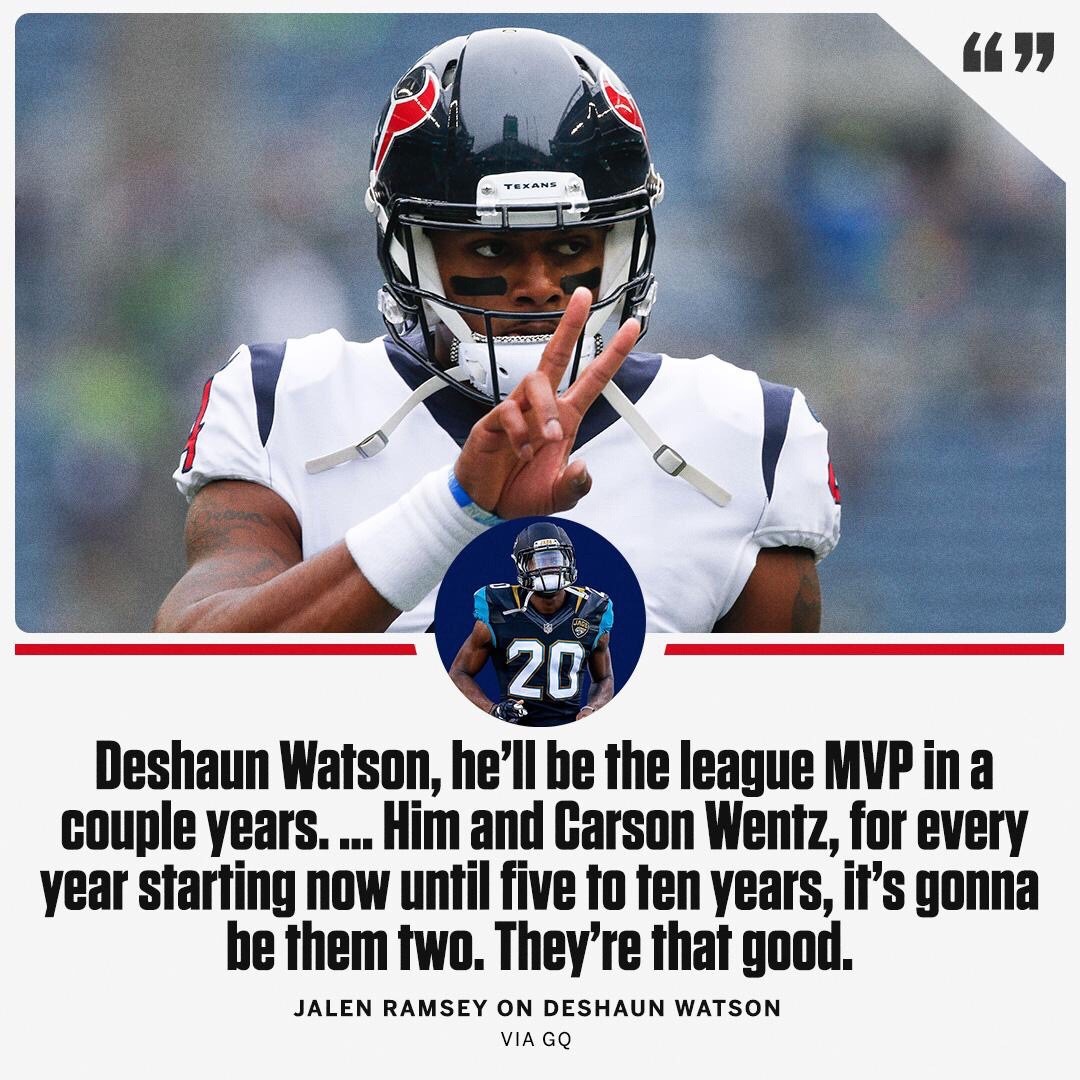 Jalen Ramsey is a trash talker, we all know that but today he went off on Quartebacks in the GQ magazine.

First up was Bills rookie QB Josh Allen, and Ramsey did not hold back.

“I think Allen is trash,” Ramsey told GQ. “I don’t care what nobody say. He’s trash. And it’s gonna show too. That’s a stupid draft pick to me. We play them this year, and I’m excited as hell. I hope he’s their starting quarterback. He played at Wyoming. Every time they played a big school—like, they played Iowa State, which is not a big school in my opinion because I went to Florida State, and he threw five interceptions, and they lost by a couple touchdowns or something like that. He never beat a big school. If you look at his games against big schools, it was always hella interceptions, hella turnovers. It’s like: Yo, if you’re this good, why couldn’t you do better? He fits that mold, he’s a big, tall quarterback. Big arm, supposedly. I don’t see it, personally.”

Ramsey said he like Lamar Jackson better than Flacco and then said this about the former Delaware Blue Hen.

“Flacco sucks. I played him two years in a row. He sucks,” Ramsey said.

Ramsey is not impressed with Big Ben either.

“Big Ben, I think he’s decent at best,” Ramsey said. “It’s not Big Ben, it’s [Antonio Brown]. Big Ben slings the ball a lot of the time. He just slings it, and his receivers go get it. He has a strong arm, but he ain’t all that. I played him twice last year, and he really disappointed me.”

“I think Matt Ryan’s overrated,” Ramsey said. “You can’t tell me you win MVP two years ago, and then last year, you a complete bust, and you still got Julio Jones? There’s no way that should ever happen. I don’t care. You know what that tells me? That tells me [Kyle] Shanahan left, went to San Francisco, got [Jimmy] Garoppolo, made Garoppolo this big thing. And now Garoppolo is a big name—and now [Ryan] has this bad year? Alright, well, was it really you, or was it your coach? He was doing what was asked of him and it was making him look really, really good.”

So which quarterbacks don’t suck, in Ramsey’s view?

“Aaron Rodgers does not. Tom Brady doesn’t,” Ramsey said. “I gotta think now, about all the teams. . . . I think Marcus Mariota is a great quarterback for their team. I think Tyrod Taylor is actually a better quarterback than he gets credit for, because he does not make mistakes. He’s honestly a Marcus Mariota type player, where he manages a game really well, always has them at least in position to be in the game late in the game. . . . Deshaun Watson, he’ll be the league MVP in a couple years. One hundred percent. There’s not even a debate about that. Him and Carson Wentz, for every year starting now until five to 10 years, it’s gonna be them two. They’re that good. . . . Dak Prescott, he’s good. He’s alright. He’s OK.”

Ramsey also commented on Kaepernick saying he should be in the NFL.