Richie Incognito was arrested in a Funeral Home for multiple charges 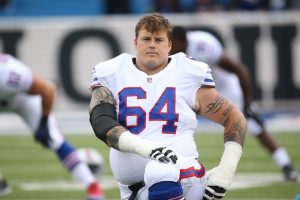 Former Bills offensive lineman Richie Incognito was arrested Monday after police say he threatened to shoot employees at a Scottsdale funeral home where he was trying to make arrangements for his father.

Police were called to the Messinger Pinnacle Peak Mortuary at about 3:30 p.m. Monday on reports of disorderly conduct. Officers were told the former Buffalo Bills lineman was upset with staff, damaged property inside the business and shouted at employees.

“At several points during his contact with staff, Incognito threatened to retrieve guns from his vehicle and return to shoot the employees,” Scottsdale police Sgt. Ben Hoster said by email.

Incognito was arrested and held on suspicion of misdemeanor charges of threats and disorderly conduct.

Here’s the info on the incident yesterday that resulted in @68INCOGNITO’s arrest. From @4JoshReed, Scottsdale PD. pic.twitter.com/8JcAhE9jEg