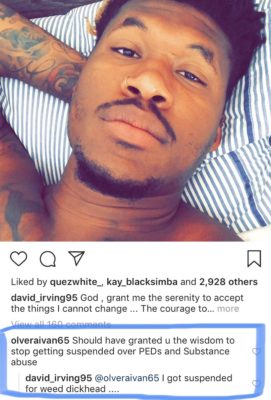 David Irving was just waking up and posted the serenty prayer on his Instagram account and when he did some user commented saying: “God should’ve granted” him the “wisdom to stop getting suspended over PEDs and substance abuse”, and that ignited the Cowboys defensive end who is currently suspended by the NFL for four games for violating the NFL’s substance abuse policy.

Irving then went off, and continued to drop bombs.

“Check this,” he began, before turning both keys. “Y’all wanna judge and say what’s right or wrong. These guys prescribe me Xanax bars, Ambien and painkillers. Some of us, like myself, have been smoking weed since [I was 12 years old and I’ve] never been in trouble with the law. Always had a 3.0 [GPA] or higher, too.

“It’s natural. I’d much rather smoke weed than take all that lab-made sh*t. You f***s talk so much sh*t as if I’m on heroin. You probably got a blunt in your mouth right now, so stfu.

“The NFL laws on weed are bullsh*t and we all know it. I’m from Cali. I’ve had my medical card. It’s nothing wrong with it.

“Also, every game you’ve seen me play in, I was medicated. I don’t see you or any of my coaches or previous coaches complaining about my play.” 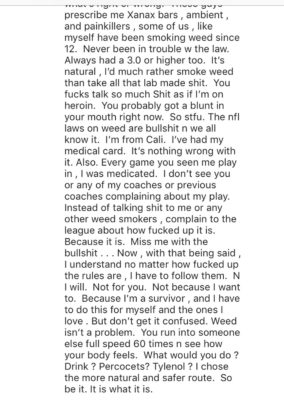 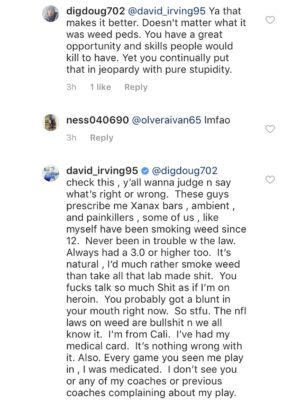 Interesting comments, what do you think? Should NFL players be allowed to smoke weed?