Could the Browns make the playoffs in 2018?

Last year as a die hard Buffalo Bills fan, I was thankful to get into the playoffs, even if I did need help from Andy Dalton and the Bengals.  This year though I am rooting for another team that shares Lake Erie.  That city is the Cleveland.  They lost Lebron this year and added some nice pieces to their football team, but the football faithful in Cleveland deserve to be in the playoffs.

When you look at teams fanbases around the NFL, If Cleveland is not in your top five, Shame on you. These fans through a parade last year for a team who went undefeated.  I was doing some research and believe this year is the Browns year.

Based on Football Outsiders’ Pythagorean Wins calculations, the Cleveland Browns should be the most improved team in the league in 2018. Obviously, when you win zero games the year prior, you have the most room for improvement. But there is also reason to think that the Browns can do more than become a 4-12 also-ran. They finally have a competent starting QB in Tyrod Taylor; they have surrounded their new pivot with ample weapons, like Josh Gordon, Jarvis Landry, Antonio Callaway, and David Njoku; and they have a litany of first-round picks patrolling the defensive side of the ball, including Myles Garrett and his game-wrecking potential.

While their Super Bowl odds are still a long +7500 (75/1), that’s actually ahead of seven other teams, including division rival Cincinnati (+10000). If you do believe that The Browns stand a chance some of the best betting sites are vetted here, based on very stringent standards. Only 13.4% of sites vetted gets their approval.

So let me go on record and say why I feel the Browns will win more than 7 games and sneak into the playoffs. If you watch football you know that the AFC is so much weaker than the NFC.  Teams like the Patriots, Steelers, Chargers and Jaguars are all one QB hit away from being a 3-13 team.  Let’s be honest, because none of them have a back-up like Nick Foles who will come in and take their team to the playoffs.  The Ravens have the best back-up with the Jets second in my opinion.  The Browns however have Tyrod Taylor and Baker Mayfield. Two solid options and one rarely makes mistakes. 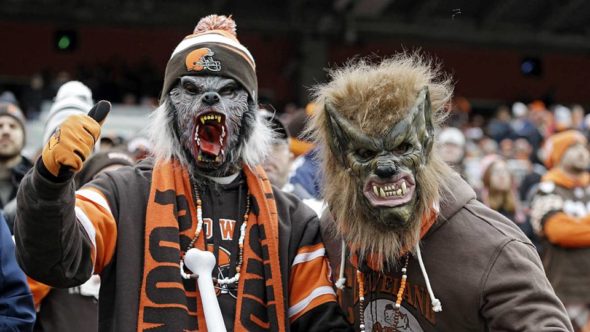 If you continue to look in the division, we do not know what the Colts will do with Luck returning, and who knows about Patrick Mahomes in KC? The Broncos have Case Keenum, but can he continue the success he had last season in a new place?  The Raiders have a solid QB in Derek Carr and I see them coming out the West, but Carr has had issues staying healthy too.  The NFL is an interesting place in the AFC and let’s face it, nothing is given.

The Browns have solid running backs this year and their wide outs are phenomenal.  If they add Dez Bryant too, watch out.  Tyrod Taylor with weapons could be fun to watch. Remember they added Carlos Hyde to their back-field and also added Nick Chubb to compliment Duke Johnson.  The Browns have weapons, and I see them getting over the hump. I am not the only one who feels the Browns will have a good chance. As you can see about the Browns have better Super Bowl odds than the Bengals who are in their division. While they will most likely improve from last year, I would tell you do not put a cap on their success. This year could be the year the Dawg Pound is back in the playoffs, and I am sure the fans would love it!

I am going out on the limb to say the Browns will win more than 7 games this year. You can put that in your stocking and love it!
Related TopicsBrownsfeaturefeaturedNFL DraftNFL Draft Prospectnfl draft prospect rumors