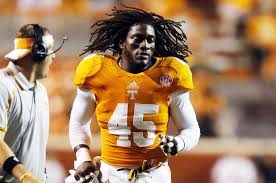 Today the Denver Broncos added former Tennessee Volunteers linebacker A.J. Johnson to their roster. Many will remember Johnson for a rape case that happened in 2015, but after being acquitted of all charges, Johnson will get his opportunity at redemption.

John Elway signed the former Vols star linebacker today, and had this to say:

“A.J. hasn’t had the opportunity to play football for the last three years while resolving a serious legal matter,” Broncos general manager John Elway said in a statement. “We’ve had several conversations with him since he’s been cleared and have become very familiar with his background and character. Our organization is confident A.J. is ready to move forward and resume his playing career.”

Johnson was a three-time All-Southeastern Conference selection from 2011-14 and ranks second all-time in tackles at Tennessee (425). To make room on the roster, the Broncos released linebacker Stansly Maponga.