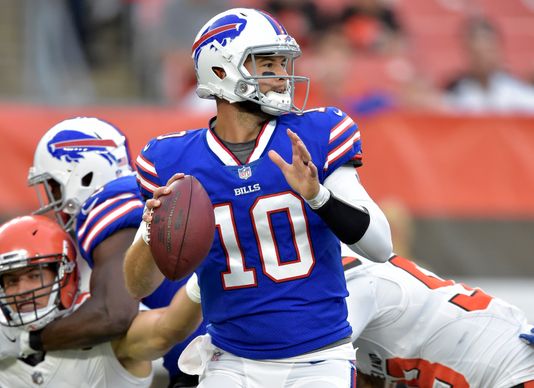 The Buffalo Bills have not named their starting quarterback for the start of the 2018 NFL season but as of right now the depth chart in my mind is Nathan Peterman, Josh Allen and then A.J. McCarron.  McCarron has not looked better than Josh Allen this off-season. In week two of the preseason McCarron suffered a banged up collar bone that was supposed to keep him out some time, but he has since returned and is expected to play in the final preseason game this week.

McCarron could be playing this fourth game for another team.  I know this sounds crazy because the Bills would be nuts to go into the season with only two quarterbacks if you watched their offensive line, but are you really going to pay your third string quarterback 5 million dollars?

I am bringing this option up because today we watched the New York Jets turn a veteran quarterback signing into a third round pick. Do I think the Bills can receive a third round pick for McCarron, HECK NO, but let’s be honest why not make him available and try to get something for him.

I have read articles from Bills beat reporters to cut him, and I think that would be a dumb move.  I think the Bills could easily get a sixth round pick for him. The Cowboys, Rams, Panthers, and Falcons are all teams that could still use a back-up quarterback in my opinion. If Jared Goff goes down his back up is Sean Mannion, if the Cowboys Prescott goes down they have Cooper Rush, if the Cam Newton goes down the team has Garrett Gilbert, and the Falcons have Matt Schaub.

I am not sure about you but I think one of those teams would definitely sleep better at night knowing they can pick up a back up like McCarron cheap.  What do you think?  Could the Bills make him available?  Today Ian Rapoport of NFL Media Insiders said guys like Mike Glennon and Steelers QB Josh Dobbs could all be dealt.  If you add in the Raiders situation with Connor Cook and EJ Manuel maybe Gruden swings for the fences.  There are teams out there looking, so it will be interesting to see what happens.