Vikings safety Andrew Sendejo has a special message for the NFL 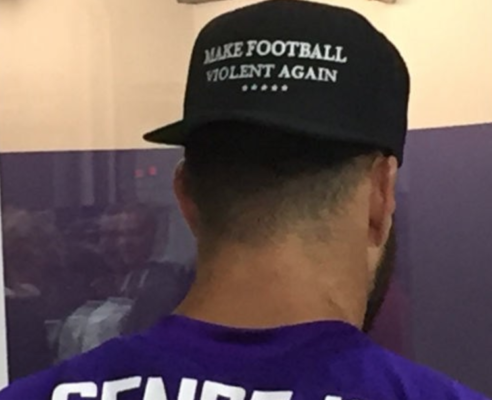 Two years ago, Vikings safety Andrew Sendejo was suspended one game for hitting Ravens wide out Mike Wallace in the head with his shoulder for making a hard tackle, and since that suspension Sendejo has not been happy with the NFL’s rules.

After watching last night’s games Sendejo once again was not too happy.

Sendejo wore a hat in the locker room and it is going viral because of the message on it.

Sendejo takes a shot at Donald Trump and the NFL by wearing a hat to training camp with the message, “Make Football Violent Again.”

Sendejo says he has been wearing it a while, but it applies now!

“I’ve been wearing this for a while,” Sendejo says of the hat. “But I guess it applies more now.”