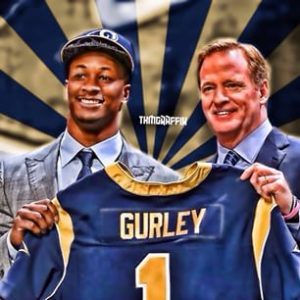 Todd Gurley is not happy with the NFL and their contracts

Todd Gurley is a dog, and last season he dominated the NFL. As a Fantasy standout for my team, he also was a main reason the Rams dominated the AFC West.  The Rams running back is not shy when it comes to the CBA, and players getting paid, but recently he told Cameron DaSilva of the Rams Wire, that the players need to prepare for a lockout in 2021.

Gurley has said this before on multiple occasions.

“Considering football’s level of brute, immanent physicality, high turnover as well as the short life cycle of its participants, it would seem to me that NFL players are in the most need of fully guaranteed contracts,” Gurley told TMZ Sports on July 5.

Gurley has also cited the amount of money NBA players make on their deals compared to what NFL players receive.

“Us NFL players, we’re just mad about NBA contracts right now, that’s all,” the Rams star told Gary Klein of the Los Angeles Times. “I just want like $80 million. Those guys are getting like $150 [million]. It’s crazy. It’s insane.”

The NFL’s last lockout was in 2011 and it was not very fun.  It lasted four months before they agreed on a new deal.  The NFL makes tons of money and the players want a bigger piece of the pie.  The XFL and AAF could have a great chance of getting the ball rolling if the NFL does in fact go on a strike.