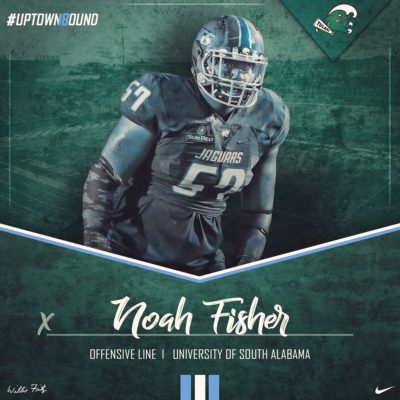 Consistent OT with the versatility to move around the line.

Tulane is getting a stud OT in his senior Year coming off a spectacular JR & Sophomore campaigns.

Straight Mauler big physical O lineman can overpower the competition also understands the OL inside and out. Has blocked against NFL Caliber guys and has done very well. Tested with a consistently high grade despite the level of competition. Strong thick upper body & arms strong  legs quick moving feet. Built like a NFL caliber OT has the blocking ability of one as well.

Recruited from Decatur Georgia in 2013 South Alabama has been the only school Fisher has ever known Collegically. Now in Tulane can see if the big man gets more attention for his outstanding career thus far. Has a solid group of guys on the 2019 Tulane team that could win some games this year  with other All Conference O lineman Corey Dublin, TE Charles Jones & WR Terren Encalade could be an explosive combo on Saturdays this fall.

Hard to believe he is ranked so low on the boards i’ve seen, my board he would be a lot higher. A OT most definitely worth taking a flyer on in a late round especially with lack of depth in past drafts and overall throughout the league .

Should be interesting if he gets a shot at the Shrine game or Senior Bowl this year.Really think he will  get a look then, maybe even an invite to the combine.