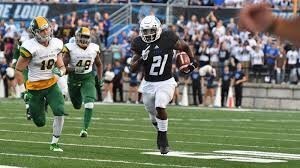 Before we go into this story, I hope everyone will please pray for former Grand Valley State running back Marty Carter, who was injured and in critical condition after being shot this weekend.

Marty Carter was recently in the news after we reported last week that he had a workout with the Kansas City Chiefs. Carter was one of the best small school running backs in the 2019 NFL Draft before deciding to leave college early and entering the Supplemental Draft.

This past weekend Carter was at a gas station where a gunmen unloaded on him and another man.  According to The Times of Northwest Indiana, Carter was one of two people shot at a gas station Saturday night in East Chicago, Indiana. Brian Thomas, a 30-year-old from Hammond, Ind., was killed in the shooting that is being ruled as a homicide.

Carter is a Father himself of two young children. He is the All-Time leading rusher for Grand Valley State, rushing for 3,728 yards and 36 touchdowns in 36 career games at Grand Valley. He also set a single-season program record and led all of Division II with 1,908 yards rushing and 20 touchdowns as a sophomore in 2016.