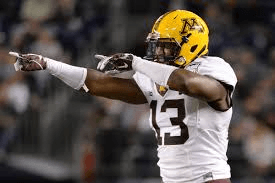 Jonathan Celestin will work out for the Falcons today

We are learning that former Minnesota Gophers linebacker Jonathan Celestin is in Atlanta today working out for the Falcons.  If you remember correctly we recently had a workout video completed with Celestin doing drills on our YouTube Channel.

The Falcons are bringing him in after watching the work-out. Celestin dedicated his senior year to his Father who died in a motor vehicle accident, in which he dominated. The 6’1 linebacker weighs 235 pounds and is in the best shape of his life right now.

Celestin kept his promise to his Father and had a solid senior season, where he finished second on the team with 78 tackles (55 solo) including 5.5 for a loss – recovered one fumble and had one pick-six – received the team’s Carl Eller Award (Outstanding Defensive Player) and was named Minnesota’s Big Ten Sportsmanship Award honoree.

Celestin is a Jonesboro, Georgia native, so getting a shot with his hometown team would be quite the accomplishment.  Good Luck Jonathan!