Is Jimmy Garoppolo losing focus or just enjoying himself? 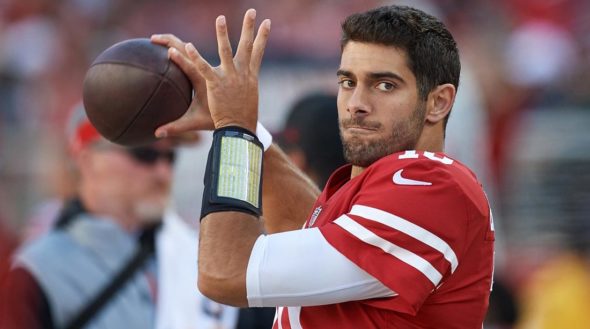 Niners fans have been patiently waiting for another playoff push from a Franchise that literally once owned the NFL.  It has been a while since the 49ers were dominating teams, but with the acquisition of Jimmy Garoppolo last year, many fans have began to dream again.

Jimmy G is a solid player, and a guy I love as a person. We worked with Jimmy G when he was coming out of Eastern Illinois and even were the people to send him his invite to the East/West Shrine Game.  There is no doubt Jimmy is a stud, but is he losing focus?

Many media outlets quickly began pointing their fingers at Jimmy after he was seen recently in public with adult film star Kiara Mia.

The 26-year old is certainly enjoying his off-season. In March, he was dating Instagram model Alexandra King. A few months later, he was spotted with a “mystery woman” outside a cocktail lounge.

It seems as if the media is all over him for dating and trying to find the right one, but will this affect his play? Last season after sitting a few games, Jimmy came in and straight dominated the NFL. The 49ers wanted to make sure he did not get away so they threw the bank at him.  He received what was the biggest contract in NFL history, a five-year, $137.5 million deal in February. Now he is having fun, but the media continues to take shots at him for dating.

I want to know your opinion, does it worry you that Jimmy is dating and enjoying himself in the off-season? I want to know because when Aaron Rodgers dates people while it is in the media it is not that big of a deal.  Maybe he is not dating adult film stars or IG models, but Jimmy may have different taste than A-Rod.

I can say this, I still think the 49ers are going to dominate, regardless of Jimmy dating anyone.  Jimmy is a hard worker with a great personality. He is going to be fine folks, do not hit the panic button yet, especially you 49ers fans.