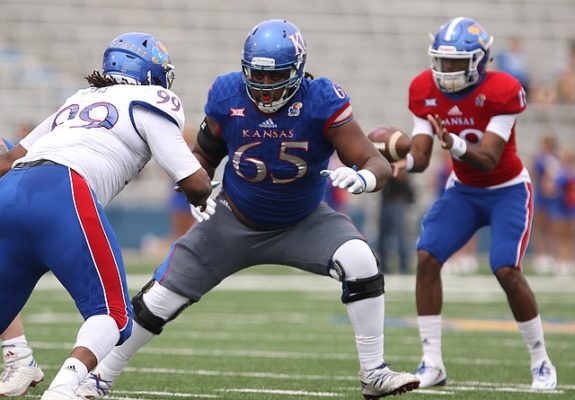 Let me tell you the story of a 2018 NFL draft prospect.

A heartfelt story of determination & overcoming many obstacles to play Offensive Guard at a Collegiate level.

Jayson Rhodes  6’ 4 308 pounds a three year starter on the O-line at Kansas  is not your average story or human being.

You can read his interview on NFL Draft Diamonds here!

Originally committed  to the small school of Hampton where he was recruited out of High School .  The Coach who recruited Rhodes at Hampton was fired due to his lack of success on the field.  Jayson was left with no College to play ball just one month before the season. Searching for any chance at all to play the game he loves, he took what was available to him which was a school called Southeast  Prep in Houston Texas . Although he didn’t use his eligibility he was at least now he had a team to play for. After three long months at the School indurring long yellow bus rides 82-0 losses & eating cold food off the dollar menu. Kept playing, training & looking for  a better opportunity. Which came in the form of the Blinn football tryout he was not accepted the first time but after his 2nd tryout , Jayson was finally told he made the team but due to five starting O linemen he would never get to play and was not offered a full scholarship . Even that did not stop him from chasing his dream to play OG at the next level.  Sitting watching three games with no much hope of starting , he finally got a chance of a lifetime.

David Beaty from Kansas was interested in Rhodes where he became a FT starter  as we as received a full scholarship for the next three years. Playing OG at a very high level against elite College athletes some of the best in the nation . Winning  awards including Offensive player of the week against Texas dominating now NFL DT Poona Ford amasing 15 pancakes in a win against Texas in 2016.

Rhodes can block with the best of them, extremely strong tough ,moves guys off the ball creates big running holes for backs to run through. Does well in pass protection can hold his own against both strong & quick defenders.

He did not have a proper pro day due to circumstances out of his control. A combination of a lot of prospects at the OG position and lack of a pro day left Jayson a UDFA.

Like the adversity he has faced before, he didn’t let the lack of interest stop him from fighting to play OG in the NFL. Still working hard everyday lifting, running working on drills waiting for someone to give him just 1 more chance.

NFL, CFL, AFL, AFL , NFL, Spring League  scouts, GM’s & respected personal Please take notice.  Watch the tape, talk to him I believe you will see a player that can run block, pass protect understands fronts & can  play with the best of them but most of all you will find a great young man with conviction, determination & perseverance to overcome any odds to make his dream a reality.

Sometimes with so many schools & so many prospects good players fall through the cracks. The great ones keep fighting, Jayson has shown the ability to play with the best & the determination to become one of the best at a Pro level.