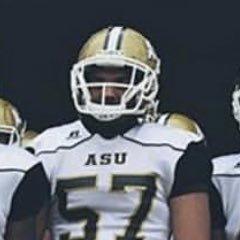 Trending upward Santana looks to earn a larger role in 2018.

Devin has seen time at DE & DT but best fits DE in a 43 or he definitely has the burst too play 3-4 OLB at the next level. Quick movement heavy but quick hand movement, gets a good  powerful punch around the shoulder pads and makes quick movements to win against bigger O linemen.

Or he also does a nice job getting low or ducks  on bigger lineman bursting up or around potential blockers.  His quickness, power, hand technique, non stop motor, pass rush ability & work ethic combined with his love of the game make him a coach’s dream. He works hard, very humble intelligent young man that his coaches & teammates really love. He is already giving back helping kids in his area get a playground built.  Type of guy that is not only good for a DL or LB corp but a City, a franchise the League

This is Devins year as a newly named captain that has been bulking up and improving his game should see a lot more time on the field this year.  His work ethic combined with his size & talent make him a player for scouts & GM’s to take a look at. After 2018 the name Devin Santana will be known in the scouting community.